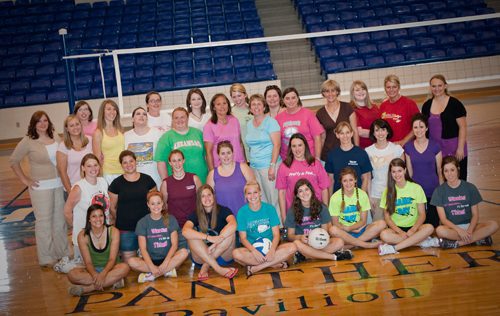 “Greenbrier has grown so much in 20 years,” Hartman said. “A lot of our community has kind of grown past us. You can’t say enough about having a community behind your sports program. We would love to build that enthusiasm in with our past and current players and managers.”

Hartman has lived in the 501 for the majority of her life, excluding a stint at Arkansas Tech University in Russellville. She grew up in Conway and played basketball for the Golden Suns. After her college graduation, she substituted at Greenbrier in February 1991.

“At the time, Greenbrier only offered basketball for girls,” Hartman said. “Volleyball was just getting started then in Arkansas. Coaches Randy Tapley and Terry May were teaching volleyball like a P.E. class in the spring of 1991. Principal Don Jones asked me if I would be interested in taking the program and making it into a competitive program.

“The school wanted to have something more for girls to be able to be active in. The program originally started as more recreational, and since then it has grown.”

A junior high program was started six years after the original, and a seventh grade program was initiated a few years after that.
Hartman credits Earlene Hannah and Mary Ann Schlientz for getting her through the infant years of the program. At the time, Hannah was the volleyball coach at Hendrix College. Schlientz was coaching at Conway – she now coaches at Hendrix.

“The main thing is that I didn’t know a lot about volleyball when I took the job,” Hartman said. “I had experience playing and coaching basketball, but nothing with volleyball. Hannah and Schlientz were my mentors. They really helped me as a young coach.”

“Sandy White, our junior high coach, has been very beneficial to help build our players,” Hartman said. “She’s had some very successful teams and two conference wins in 2007 and 2008.

“Our big thing is getting a lot of kids involved. Our goal every year is to get to state. We’re in a very competitive conference, and we’ve been right on the edge.”

The high school program’s best year came in 2005 when the Lady Panthers made it to the state tournament. Last year, Greenbrier finished 13-12 overall and 6-8 in the 5A-West, tying for fourth place. Central Arkansas Christian had a better point differential, leaving the Lady Panthers just on the outside looking in.

“We’ve had winning seasons every year, but we’ve just been on the wrong side of some close matches the last few years that have put us outside of state,” Hartman said. “We have a strong foundation coming back this year. It could be one of the largest senior classes we’ve had.”

Greenbrier volleyball alumnae will be honored at a match Tuesday, Aug. 31, at Panther Pavilion.

“This reunion is important for our current kids and our past players. We are a family. Some our past players are having kids now that are coming through the program. We have a lot of siblings that play together or at separate times. Our players form special bonds through the sport, but some of them have gone their own ways. We want to bring that bond back to Greenbrier volleyball.”