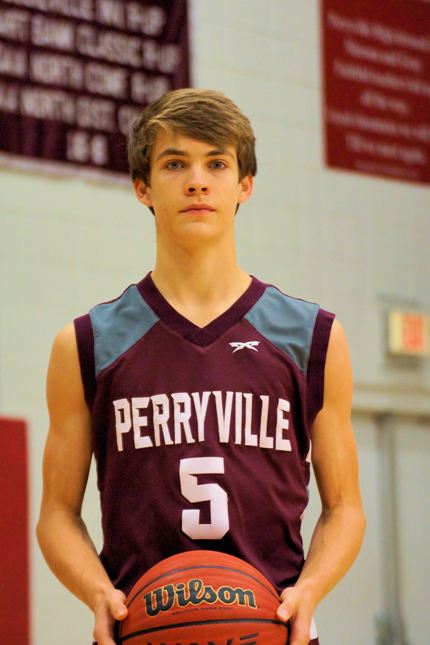 
Right out of the gate, the Perryville Mustangs are focused on putting last season behind them. Off to a 7-2 start, the young team is already making great strides toward its goal of making the state tournament.


“Last year, we started five sophomores for most of the season,” said junior point guard Garrison Branscum. “We were really inexperienced. This year, those five sophomores are now five juniors and one year better than before. We’re growing as a team and playing well together.”


Branscum was selected to this year’s 501 Basketball Team — 34 players representing the best the 501 has to offer both on and off the court. The junior was nominated by his head coach, Donnie Smith. The team is sponsored by First Service Bank and First Security Bank.


“Garrett is a heads-up player who gets the offense set and is very tough on defense,” Smith wrote in his nomination. “He doesn’t give up. I expect him to lead our team during games and make sure we stay focused and not let other teams disrupt what we are trying to accomplish during games.


“He’s just an overall great kid who seems to have a good head about the game, and he knows how to act in the classroom and on the court.”


“What I really love about our team is that we all play together,” Branscum said. “We all grew up playing pee-wee basketball together, and our experience and friendship on and off the court is what makes us successful.”


Although the team’s first two losses were a setback, Branscum says that losing helped his team learn its identity.


“We started out the season really well,” Branscum said. “But then we hit a two-game stretch where things weren’t clicking for us. We didn’t play as well as we could. We made some changes and were able to pick ourselves up from that and keep going. Falling down and picking ourselves back up was exactly what our team needed to get back on the right track, and we’re a better team because of it.”


Early triumphs aside, the Mustangs know that the biggest challenges for the team lie ahead in Class 4-3A conference play.


“Each of our conference games are important to us,” Branscum said. “We don’t have an easy conference game. Lamar is one team in particular that I’m excited for because we’ve already beaten them once this season. Beating them again at home would be big.”


Keeping his team motivated comes naturally for Branscum, who has been viewed as a role model for the majority of his high school career.


“I’ve been labeled our team leader since I was a freshman,” Branscum said. “I push my teammates to get better every day and try to show them the importance of going to the gym, having good attitudes and having good team chemistry.”


Branscum attributes his on-the-court presence to one of his biggest basketball role models — his older brother Holden Branscum.


“One of my favorite basketball memories was getting to play a couple of games with my brother when he was a senior,” Branscum said. “I had always played with him growing up, but I never appreciated the leader he was until I played on the same team as him. I learned a lot from watching him play and seeing how he approached the game. He never gave up, no matter who we played.”


Off the court, Branscum boasts an impressive 4.0 GPA. The junior Student Council vice president plays golf and is involved with Beta Club, FBLA and FCA at Perryville.


“I wouldn’t say that it’s easy [to juggle academics and athletics],” Branscum said. “My mom and dad push me and stay behind me to keep me on track with school. My friends push each other to be the best version of us that we can be.”


Branscum’s favorite pastimes include watersports in the 501, vacationing with his family and volunteering at Sacred Heart Church in Morrilton. After high school, the junior hopes to continue playing basketball on the collegiate level.


“I definitely want to go to college,” Branscum said. “On and off the court, I’m working hard every day in hopes of being able to transfer to the next level, both academically and athletically. It would be awesome to get an opportunity to continue playing basketball.”


Perryville plays host to Fountain Lake in the Perry County Classic at Perryville on Wednesday, Dec. 28.