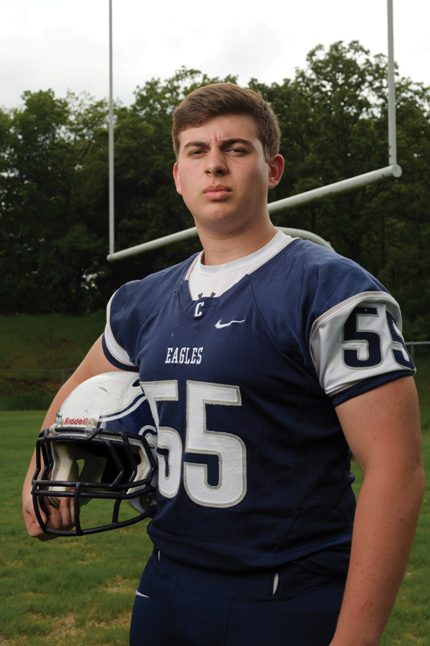 
The Conway Christian Eagles are poised to finish off another great year in 5-2A play. With a little luck and two wins to close out the year, the Eagles could end up as 5-2A champs for the second year in a row.


Senior Carter Bramlett is one Eagle who has played a key role in Conway Christian’s success over the last three years.


“For the past couple of years, we’ve done nothing but improve each season,” Bramlett said. “We won conference last season, and we lost in the second round of the playoffs. This year, I’d like to win conference again. I’d like to go to the championship. That’s a good goal for our team this season.”


Bramlett, who plays on both the offensive and defensive lines for the Eagles, was selected to this year’s 501 Football Team — 27 players representing all 11 counties of the 501. The team boasts the best the 501 has to offer both on and off the field. Bramlett was nominated by his head coach, Michael Carter.


Bramlett moved to Conway from Montgomery, Ala., when he was 3 years old. He attended public school in Conway until the seventh grade when he began attending Conway Christian. That was the same year he started playing football.


“I got a later start,” Bramlett said. “My friends drew me to it. It was a friend of mine who had been going to Conway Christian for several years before I started coming here. He and his family brought up the topic of coming to school with him. I shadowed my sixth grade year for a day. I enjoyed it. The next year I came to Conway Christian, and that was one of the first things that happened — joining the football team.”


“I haven’t always been the toughest guy,” Bramlett said. “When I was in the seventh, eighth and beginning of my ninth grade year, I enjoyed contact but I didn’t like being yelled at. I’m used to it now. It took some getting used to. I would get down on myself. I grew up a little bit and matured. Coach Carter has talked to me a couple of times one-on-one, telling me that I’ve grown up and become more of a man.


“I want to lead the team. I want the guys to look up to me, whether it’s things that I say or my actions on the field.”


At 5-3 overall and 4-1 in 5-2A play, the Eagles control their destiny. If they win out, they can assure the second seed out of the 5-2A. With a little luck, the Eagles could end up on top of the 5-2A. The Eagles’ only conference loss this year was to England. Up next for the Eagles is Magnet Cove, a team that Bramlett has been looking forward to playing all year.


“They’re always No. 1 for me,” Bramlett said. “They have been the class of the 5-2A for so long. We were losing last year at halftime, 14-0, and we came back out and won 17-14. It was exciting. We always look forward to playing them. They are a respectable team.”


Bramlett plans to close out his senior year by playing soccer this spring. He’s also a member of the Drama Club at Conway Christian.


“I was in a play for the first time last year,” Bramlett said. “I’m not bashful or shy, but it was a big deal to learn how to square dance and dress up like a cowboy. That was fun.”
Bramlett is an active member of his youth group at University Church of Christ.


No matter where his path leads after graduation, Conway Christian will always hold a special place in Bramlett’s memories.


“This football program here at Conway Christian is my favorite thing,” Bramlett said. “This has really been a blessing to me.”