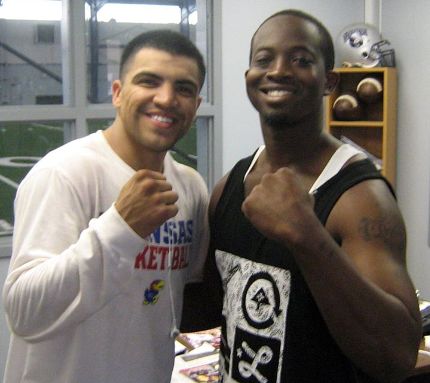 Jeremy Byles of Conway isn’t giving up on his dream.

Byles, 26, continues to train in hopes of reaching his goal of qualifying for the 2016 Olympic boxing team and, ultimately, a professional career in the sport he loves.


The 2005 graduate of Conway High School has pursued the dream since he was in his early teens. Now a newlywed and an employee of Snap-On Tools, he continues to train under Chonney Abernathy at Rose City Boys and Girls Club in North Little Rock and with Henry Brisco, the University of Central Arkansas strength coach, serving him in that capacity.


“I’ve been with Coach Chonney for years, and he shares the passion with me,” Byles said. “Conway doesn’t have a good place to box, and if he thinks you’re taking it serious, he’ll work with you.”


Abernathy says he sees something special in Byles.


“Boxing is more than throwing hands. Boxing is thinking, defense, offense, everything.”


Byles remembers being “the only one who had the guts to stand up to a bully” at Ellen Smith Elementary School, and his father ultimately got him involved in tae kwon do. After a few years, though, he started to seriously pursue boxing.


“It teaches discipline and patience,” he said. “I’ve got a deep passion for the sport.”


Several years ago he moved to Bryant, where he met Bob Sanders, who in turn introduced him to some of the Little Rock boxing community. Through Sanders he met Jermain Taylor, the former world middleweight champion, and trainer Ozell Nelson.


“We went over what I knew, and I impressed (Nelson) with my work ethic,” Byles said. “He cracked a joke and said, ‘You’re not as green as I thought you were.’”

In 2010, Byles was one of five winners — worldwide — in the Muhammad Ali Greatest Inspires Greatness essay contest, sponsored by Everlast.


“I poured everything I knew about boxing and my passion for it into (the 500-word essay),” Byles said. “I ended up getting runner-up around the world.”


He received a letter from Ali afterward.


He also has connections with Terry (The Troublemaker) Smith, a Little Rock pro boxer who has sparred with the Klitschko brothers, heavyweight champions.


Byles, who competes as a middleweight (165 pounds), married the former Amber Nolen of Monticello on June 8. She, too, helps him pursue his dream.


He said he was getting used to balancing work, marriage and boxing.


“You have to take it one day at a time and make sure you don’t waste any time during the day,” he said.


Age shouldn’t be an issue, he contends.


“A lot of people talk about that, but Bernard Hopkins just turned 50 and he took a belt from somebody 28 years old,” Byles said. “It’s really mental. If you don’t think age is a factor, you’ll be just fine.”


He’s now working on getting into shape for the Arkansas Golden Gloves tournament next spring and is a frequent runner on Conway’s trails. He and Abernathy hope the Golden Gloves will be his route to the Olympic Trials, and from there, anything could happen.


“I know the style of boxing, and I’m just confident that I’ll win,” he said. “I’ve got so many people in the fight game that I know, like Coach Chonney, Terry Smith, (professional boxers) Jonathan Nelson, Rashad Ganaway. Coach coaches me like an amateur, and the others train with me like a professional.


“With my passion, I know I’m going to do great things in the sport.”