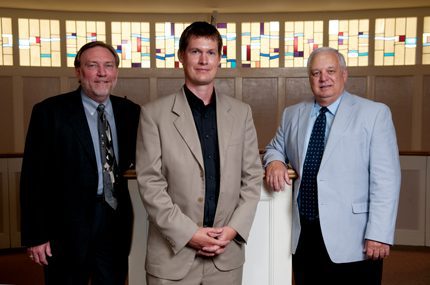 
For 10 years, the Baptist Missionary Association Theological Seminary at Jacksonville, Texas, has had an extension campus at Central Baptist College in Conway.

The program may be one of the “best kept secrets” in Central Arkansas, according to Dr. Thom South, extension campus administrator. But he and Dr. Virgil Porter, who works in administration and recruitment for the extension campus, would like to change that.

The BMA’s goal in starting the program was to provide opportunities for those already active in ministry in Arkansas to receive additional education without leaving their ministries. Porter estimates that the average student is in his or her 30s.

The program was originally aimed at people already in ministry, but “we have appealed to a lot of people who have secular jobs,” South said. “There’s a lot that work secular jobs and want to get into ministry.” There are also some not interested in professional ministry who want to be more effective in their churches.

The program was aimed originally at CBC graduates, but has drawn students from other colleges. It was aimed at those living in the 501, but has attracted students from places such as Jonesboro and Pine Bluff.

“We set up a schedule to cater to commuters,” South said. “The majority of [students] are living and ministering in the 501 area.”

The seminary offers five three-credit courses per semester, set up in three-hour sessions each week. Classes are offered 2 to 5 p.m. and 6 to 9 p.m. on Tuesday and Thursday, and recently a Monday evening class was added. The seminary calls this format “ministry in motion.”

This three-hour emersion without a break isn’t easy. It’s particularly difficult for those in Dr. Brian Rickett’s Greek and Hebrew classes because students have little time to assimilate what they learn in the first hour before moving on to the second and third hours.

Since its onset, the program has served about 135 students and graduated 26. And it is slowly growing. The first semester, 10 years ago, there were less than a dozen enrolled; this past semester, there were about 35.

One of the program’s assets is its double accreditation by the national Association of Theological Schools (ATS) and the Southern Association of Colleges and Schools (SACS).

“We’re the only accredited seminary in Arkansas that offers a whole degree,” South said. At one time, those seeking a Master of Divinity (M.Div) were required to take some of their classes in Jacksonville. Since 2011, that is no longer the case.

“We offer the entire Master of Divinity degree and [two] courses leading to a master of arts,” South said.

The M.Div is a 90-hour course and covers everything — theological, pastoral and administrative — a minister needs to know.

The Master of Arts in Church Ministries is a 60-hour course that focuses on practical studies such as church administration, counseling and relating to people.

The Master of Arts (Religion) is a 48-hour course that focuses on theology and Biblical studies.

“It’s not as ministry oriented,” said South, adding that many lay people who want to better serve their congregations find the course helpful.

In the latest move forward, the Conway campus is now offering video classes taught at Jacksonville and viewed by Conway students, as well as classes taught in Conway and viewed by Jacksonville students. The seminary is also moving toward putting its M.A. in Church Ministry online. With approval by the ATS in 2012, the seminary offered its first online class that summer.

“We’re a theologically conservative school,” South said. “We try to make theology and the Bible practical; we try to show how you apply this.” That aspect appeals to the very students the program is aimed toward. One example of this practicality is the hands-on approach of the class in discipleship, which takes its students into the community to perform such activities as raking leaves or washing the windows of those who can’t do for themselves.

The BMA is “on the cutting edge of disciple-making,” Porter said.

The program’s other appeals include small class sizes, the “ministry in motion” schedule that allows working ministers to continue their educations and the fact that all of its instructors not only have doctoral degrees, but are also working pastors themselves.

“We have a rich background to give to our students,” said Porter.

“There’s no better bargain” in education, South said. The support of the BMA churches makes the low cost possible.

“The seminary wants this to grow,” said Porter. “We’re investing more people here for the growth of the extension.”

South pointed out that Conway really has, not three, but four institutes of higher education. The dream is that in time, the Conway extension will have a larger footprint in the community. In the meantime, South is grateful that CBC has graciously offered it a home.