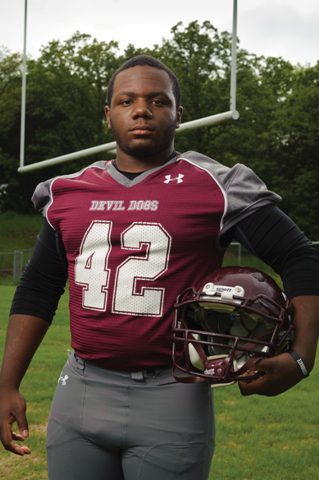 
Tracy Blakley knows what it means to be a champion, and the senior is determined to help Morrilton reach those heights again.


As a sophomore, Blakley was a member of Morrilton’s 2013 championship squad. He’s confident that the Devil Dogs have the potential to be champions again.


“We want to be the best team that we can possibly be,” Blakley said. “We have potential to be a really, really good team this year. I don’t want us to get to a certain spot and think that’s good enough. When we think we’ve reached that point, I want us to push a little bit harder to be a little bit better.”


Blakley was selected to this year’s 501 Football Team — 27 players representing all 11 counties of the 501. The team boasts the best the 501 has to offer both on and off the field. Blakley was nominated by his head coach, Cody McNabb.


“Tracy is a smart leader who loves playing football,” McNabb wrote in his nomination. “He loves life and respects the game, as well as other players. Everyone likes him. He will lead our team and be a great player. He was a big part of our team on both sides of the ball last season.”


“My personal goal this year is to stay healthy,” Blakley said. “The past couple of seasons, I’ve had nagging injuries. You can’t help your team if you’re on the sidelines. Being a leader on the team, I can set a better example when I’m out there on the field than when I’m on the sideline.”


Blakley and the Devil Dogs know what it will take to jump back up to elite status in the 5A West — taking down the Maumelle Hornets.


“Last year, we were close,” Blakley said. “We were good enough to beat them and just didn’t do it. We are looking forward to doing it this year instead of just knowing that we can.”


Blakley has played the sport he loves since he was in the third grade. He played up with the fourth-graders, and it took some convincing to the coaches. 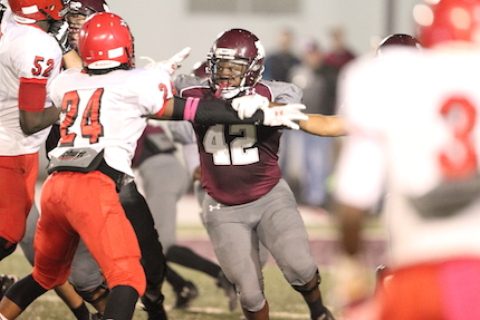 “I wasn’t old enough to play for the fourth-grade team,” Blakley said. “I cried every day until they let me. I was a huge third-grader. I’ve always gone to school in Morrilton. I love it there.


“My family is a big football family. My uncles and my grandpa have always played Morrilton football and done good things. My cousins, everybody has played there. I fell in love when I was little.”


Blakley is focused on making great memories in his senior year. He says he’s been blessed to have some landmark memories already.


“In the championship year, beating Pulaski Academy, that was probably the most fun football game I’ve ever played in my life,” Blakley said. “Just going back and forth and back and forth. It was a huge adrenaline rush. It was cold. It was just the kind of game that a football player dreams to be a part of.


“And who could forget the championship game against Batesville? Just seeing that field goal being missed by about a foot . . . oh, it was crazy.”


Off the football field, Blakley is heavily involved in Beta Club. He was elected as the state’s vice president for this school year. He attended the Beta nationals this summer. He also plays in the outfield for the Devil Dog baseball team. Blakley attends Mt. Hebrew C.M.E. Church in Springfield with his family.


“When I’m not playing sports, I’m just trying to keep my head in the books,” Blakley said. “I want to make sure I’m successful when I’m done playing football. I realize that I won’t be able to play my whole life.”


Blakley and Morrilton face off against Searcy and fellow 501 Football Team honoree Andrew Neaville at 7 p.m. Friday at Searcy.