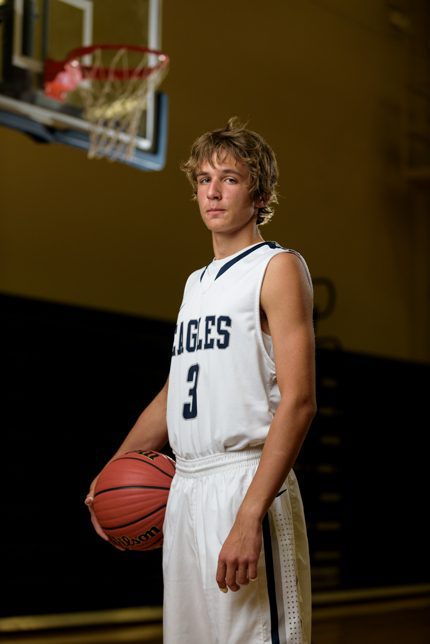 
After managing just one win last year, Conway Christian is committed to changing its basketball culture this season, one game at a time. According to junior guard David Belvardi, the Eagles’ first order of business is understanding one another on the court.


“Our goal is to keep moving forward,” Belvardi said. “Last season, we only won one game. This year, we have already won two. We’re improving each game and building from that. We’re starting to understand our strengths and weaknesses and understanding how we’re supposed to play in order to be successful. We haven’t reached our peak yet. We’re becoming a close-knit group and getting better as a team and as individual players. Because of that, I think we’ll be a contender by year’s end.”


Belvardi was selected to this year’s 501 Basketball Team — 34 players representing the best the 501 has to offer both on and off the court. The junior was nominated by his head coach, Austin Mitchell. The team is sponsored by First Security Bank and First Service Bank.


“David is one of the hardest working players on the court,” Mitchell wrote in his nomination. “I never find him skipping reps or cutting corners in any drill. He does a good job of knocking down open shots and should see a steady improvement in his field goal percentage as well as his on-ball defending this year. Every player knows he gives his best, and they expect him to lead by example.”


With no healthy seniors on their roster, the Eagles (2-12, 1-7 4-2A East) have relied on their junior class to carry the weight of the leadership this season. For Belvardi, it’s the perfect opportunity to reach a personal goal.


“My goal this season is to become more of a vocal leader for the team,” Belvardi said. “I’m focused on being more friendly and supportive to help improve our team chemistry. When things go wrong or if someone gets frustrated, it’s more beneficial to build someone up rather than tear them down. I just want to be the guy everyone can talk to and trusts to get the job done.”


“For David, leading by example is an understatement,” Mitchell wrote. “In drills, he gets people where they need to be. He is picky and notices the small details to make sure he leads by example throughout practice. His fellow players and classmates see this, and it immediately becomes contagious.”


Belvardi eyes the upcoming rivalry game with St. Joseph as an opportunity to help the Eagles earn their third victory.


“We’ve been rivals for as long as I can remember,” Belvardi said. “It’s a big game for us every time we play them. This week, we are working on our focus and hitting open shots. If we can make smarter shots and handle their defensive pressure, then I think we have a chance to get a win.”


Originally from Hungary, Belvardi recently spent a year overseas, where he focused on improving his basketball skills.


“The time I spent overseas was one of the most important parts of my basketball career,” Belvardi said. “I improved my ball handling a lot. In years past, I used to get so scared on the court that I would pick up my dribble. My Hungarian team looked to me as a leader, so I had to improve my own game in order to help my teammates improve to be successful. I had to keep dribbling. I had to work harder than I ever had to before, and I’ve become a better player because of it.”


Off the court, Belvardi plays tennis for Conway Christian, where he won the singles district tournament as a sophomore. In the classroom, the junior enjoys drama club and has a passion for computers. In his community, Belvardi enjoys attending Antioch Baptist Church and First Baptist Church in Conway.


“David is extremely studious in the classroom and takes his studies very seriously,” Mitchell wrote. “He always comes to class prepared and thoroughly prepares for all tests and quizzes.”


After high school, Belvardi plans to follow in his parents’ footsteps by pursuing a degree in business management or industrial engineering.


“Even though my family and I have gone through a lot of struggles lately, I have tried my best to have faith and focus on how blessed I am,” Belvardi said. “I’ve been trying to put more time and work into things that I enjoy and hold important, whether that be basketball, praying, building a better relationship with my parents or studying.”