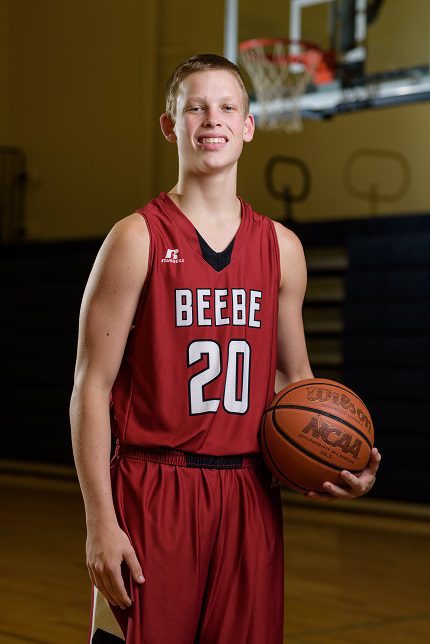 13 Dec Beebe’s Harris a ‘teacher’ on the floor


“This season, our team is focused on learning,” Harris said. “Each game, we’re learning how to play opponents before our conference schedule begins. If we can learn from the mistakes that we can control, like being in the game mentally or turnovers, then I think that we will fare well in our conference schedule.”


Harris was selected to this year’s 501 Basketball Team — 37 players representing the best the 501 has to offer both on and off the court. The team is sponsored by Conway Ortho and Sports Medicine, Conway Regional Health System and First Security Bank. Harris was nominated by his head coach, Ryan Marshall.


“Steele is very humble and is a teammate that everyone trusts and knows he has their best interests in mind,” Marshall wrote in his nomination. “He has the ability to shoot the three and a knack for scoring. He also leads and communicates with teammates well.”


“Steele is a good passer and defender on the court,” Badgers play-by-play announcer Shane Smith said. “He leads by example and hustles and dives for loose balls. Even though he is quiet, he impresses me as another coach on the floor. He’s not flashy, but he hustles and gets out there and shows a good work ethic. He is a great role model for the younger players.”


Off to a 5-6 start to the season, the Badgers have experienced their ups and downs this year — challenges that Harris says are opportunities to teach those around him.


“When we make mistakes on the floor, it’s my job to help keep my teammates’ heads up, move on to the next play and not let it stick around for them to think about,” Harris said. “This year, we have a goal of winning the conference and making it to the state tournament again. That’s something that Beebe hasn’t done in a while, so it has been our main goal. In practice, I try to coach the younger guys and teach them how to be a better version of us. If we all play together, we can go as far as we allow ourselves to go.”


Harris says his desire to teach others comes from having good basketball role models growing up.


“My favorite basketball memories are the time I spent with the senior group from last year,” Harris said. “When I was coming up as a sophomore, they were mentors for me. All the memories I made on and off the court with them have shaped a good healthy relationship with the basketball team today.”


Up next for the Badgers are the winless Clarksville Panthers. Despite the team’s record, Harris says that no team can be taken lightly.


“As always, it will take a good mental effort and physical effort to get the win,” Harris said. “We can’t let them come out and get the first blow. We have to set the tone and control the game from there. If we can do that, then we should be in for a good game.”


Off the court, Harris is a member of Fellowship of Christian Athletes and helps coach peewee basketball at Beebe.


“I’ve been coaching peewee basketball since my sophomore year,” Harris said. “It feels really good to make an impact with the kids. Hopefully, my coaching will get them to want to continue basketball when they get older and instill the love of the game like my coaches did for me.”


“Steele is at the gym at 6:30 each morning assisting with coaching the junior high team,” Marshall wrote. “He coaches the peewee team, helps out with a lot of different programs and is willing to do whatever it takes to help others out. He has always taken care of his grades and is never in any trouble.”


After high school, Harris hopes to play college basketball and plans to pursue a career in either computer science or education.


“I’ve always thought about coming back to Beebe and teaching computer science,” Harris said. “I also don’t know if I can go that long without thinking about basketball — perhaps I can coach basketball and be a teacher. That would be a dream job for me.”


Regardless of where his future takes him, Harris plans to make his final season with the Badgers his best season yet.


“Nothing I do this season would be possible without my coach,” Harris said. “Coach Marshall is a huge reason why I’m still playing basketball. I appreciate everything he’s done for me as a player and as a person. He’s really helped shape my life to where I want it to be.”
Beebe plays host to Clarksville at 7:30 p.m. Friday.