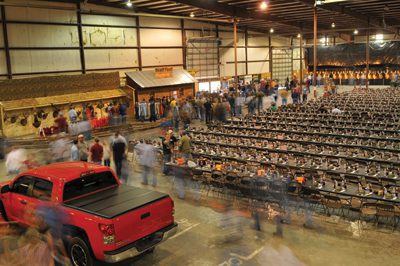 “Sharing the Gospel is the single most important thing we do at Beast Feast each year,” said Glenn Crockett. “There have been hundreds of men saved throughout the years from each event. We would do it all to save just one.”

Crockett has been involved with Beast Feast since its conception nine years ago. The event hosted 500 men in its start in 2000. Last year, the attendance was 2,800.

“Imagine walking into a room that has place settings for 2,800 people,” Crockett said. “It’s just amazing to see it all come together. Beast Feast is a way to pull men together, have a good meal, win some great prizes and be inspired by great speakers.”

Grand prizes in the past have included bows, guns and hunting trips. This year’s grand prize is a 2009 Polaris Sportsman 500 ATV. Most of the prizes are donated by corporate sponsors, which help fund Beast Feast.

The real prizes, however, are the guest speakers. Past speakers include former Gov. Mike Huckabee.

“Our speaker this year will be comedian Brad Stine,” Crockett said. “He gives a hilarious, clean act. He’s not a fisherman or a hunter, but he’s going to be a great speaker for us this year.

“With 2,800 guys, plus vendors and exhibits, it’s hard to find a venue every year that’s big enough. It’s neat to see all of the people that work together to make this thing possible.”

The impact of Beast Feast is being felt outside of the 501.

“Every year we have two to three churches that come up a few days early to learn how to put on a Beast Feast in their own community,” Crockett said. “It’s gone well beyond Conway. We’ve had churches from Texas, Tennessee and Florida that we’ve worked with to help them with the best practices that work to put on an event of this size.”

The Beast Feast has taken some heat through the years for not allowing women to attend.

“You see so many single-parent families these days, and it’s usually the father that is missing from the picture,” Crockett said.

“Our goal is to help build up stronger men in the household. If men would step up and take more of a leadership role in the family – like they’re called to do – then families would have a chance to be stronger.

“We’re trying to give men an opportunity to hear a message that might guide them in the right direction. It’s not about leaving anybody out – it’s about focusing on those that really need to step up.”

Beast Feast 2010 will be held Saturday, Feb. 6. For information on tickets, location and times, visit www.beastfeastarkansas.com .