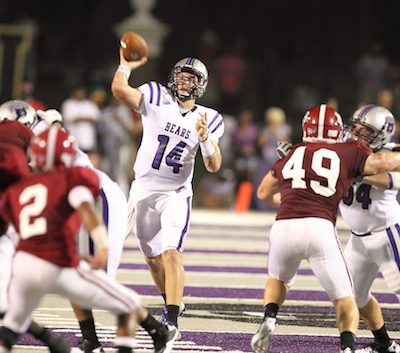 A record-breaking crowd showed up at Estes Stadium Thursday for the University of Central Arkansas Bears’ first game on their new purple and gray turf. All 12,755 in attendance got quite the show as the Bears dominated the Henderson State Reddies, 38-14.


“I thought we came out very focused and on point in all three phases of the game,” UCA coach Clint Conque said. “The kicking game played very well. On offense, we hit some big plays. The defense did well, too. We had a couple turnovers, but we asserted ourselves. A lot of guys got some action. I’ve been bragging about our receivers, and those guys showed up today.”


Quarterback Nathan Dick put up some big numbers. The senior finished 27-of-36 with three touchdowns and one interception, capping his night with a 40-yard touchdown to freshman receiver Al Lasker early in the fourth quarter to put the Bears up 31-0.

The Bears (1-0) wasted no time putting points on the board, scoring on their first drive. After forcing the Reddies (0-1) to a quick three-and-out to start the game, UCA marched down the field on a 13-play drive.


Dick was sharp on the drive – the senior completed 7-of-8 passes, finishing it off with a 21-yard touchdown pass to senior receiver Derrick Steele.


The Bears’ second chance on offense ended just as well. Junior running back Terance Bobo converted a fourth down with a 4-yard run for a touchdown.


It looked like UCA was going to get on the board again late in the first half. With 2:33 left in the second quarter, the Bears started a drive from their own 20. On the first play of the drive, Dick turned the field around with a 42-yard pass to senior receiver TJ Adams. But the Bears fizzled out when Dick fumbled after being sacked at the Henderson St. 15 yard line.


“I’m just kind of disappointed with the last two minutes in the first half,” Conque said. “That drive sticks with me with the turnover. It’s the first game. We had a lot of mistakes but a lot of good things, too. We came out of it pretty healthy.”


Eddie Camara gave the Bears their first points in the second half, getting the hometown bounce off the crossbar on a 42-yard field goal and putting UCA up, 17-0, with 8:34 in the third quarter.


The Reddies ended the shutout with 7:21 left in the game. Nathan Nall connected with Jazz Scott for a 7-yard touchdown pass, reducing the Bears’ lead to 31-7.

But the Bears weren’t finished. Redshirt freshman Roosevelt Tyler put the Bears on the board one last time with a 31-yard touchdown run with 7:09 left in the game.


Henderson State tacked on another score in the waning minutes of the game. Israel Valentin rushed for a 9-yard touchdown to get the game to its final, 38-14.


Bobo led the Bear ground game with 43 yards on 12 carries and one touchdown. Croom led the receivers with six receptions for 79 yards and a score.