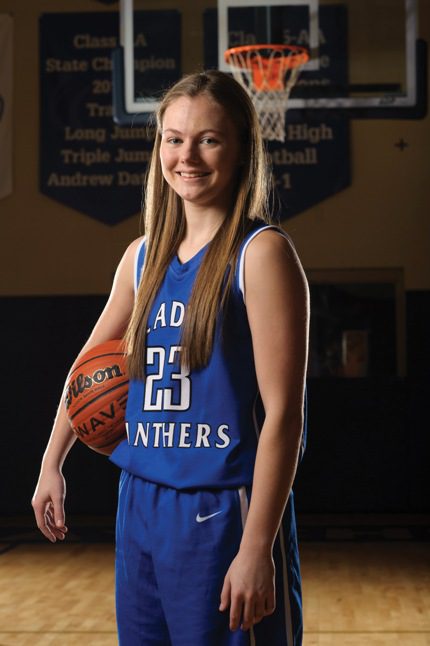 
Every basketball player has a story about the first time they picked up a basketball. Few stories, however, are like Greenbrier junior point guard Kory Westerman’s introduction to the game. Less than a week old, Westerman was already learning the basics of the game she’s still playing today.

“I went to my first basketball game when I was three days old,” Westerman said. “My parents were coaches and they coached my older sister at Greenbrier. They would pass me around in the stands as a baby and others would take turns holding me each game. For me, the ball was life, literally. I’ve been around the game ever since.”


Westerman was selected to this year’s 501 Basketball Team — 24 players representing the best the 501 has to offer both on and off the court. Westerman was nominated by Greenbrier’s head coach, Tobin McCammon.


“Kory personifies all the qualities a coach wants in a player,” McCammon said. “She is an outstanding player and a great leader. She is an intense competitor and always gives her best. She has high expectations for herself and keeps very high standards. She is the hardest worker and the most competitive kid on our team.”


It may sound cliché to suggest that someone eats, sleeps and breathes basketball — but for Westerman, the cliché fits perfectly.


“I’m always watching classic games,” Westerman said. “Michael Jordan, Larry Bird, Magic Johnson; it’s always basketball for me. My favorite player is Shoni Schimmel, who plays for the Atlanta Dream in the WNBA. I’ve been following her ever since she played college ball at Louisville. She’s one of my role models and a great athlete.”


When she’s not watching the game, she’s playing the game, and when she isn’t suited up, Westerman is teaching others how to get involved in the sport she loves.


“Kory works basketball camps and continually works with kids to assist them in many ways,” McCammon said. “She is an excellent representative for our community and a fine example for young people to follow.”


In her junior season with the Panthers, Westerman is working hard to help the team achieve something it hasn’t done in years — make it to the state tournament.


“Last season was heartbreaking,” Westerman said. “Making the state tournament was our goal and Greenbrier has not made it in a very long time. The last time we made state was due to another team’s forfeit and it didn’t feel earned. We had to beat Alma at home. It was senior night — the final game of the season — and we ended up losing. We were so close. We were one game away.


Off the court, Westerman is a member of Greenbrier’s EAST program and Beta Club. She also plays AAU basketball in the summer to hone her skills. Though she stays busy with athletics and academics, Westerman also finds time to give back to the 501.


“Last spring, the EAST program went to Vilonia to help in the tornado relief effort,” Westerman said. “We put our rivalry aside and went to help serve breakfast to all the workers and clean up debris. We just wanted to show them that we’re all here for each other.”


Though just a junior, Westerman is already planning for her future. The 4.0 student is determined to take her athletic talent to the collegiate level.


“I really want to play college basketball, so I’m doing everything I can to get noticed by schools this year,” Westerman said. “I definitely want to be a coach. I’m way too competitive not to be. I’d like to either coach at the high school level or become a graduate assistant wherever I play in college and eventually move into a head coaching role.”