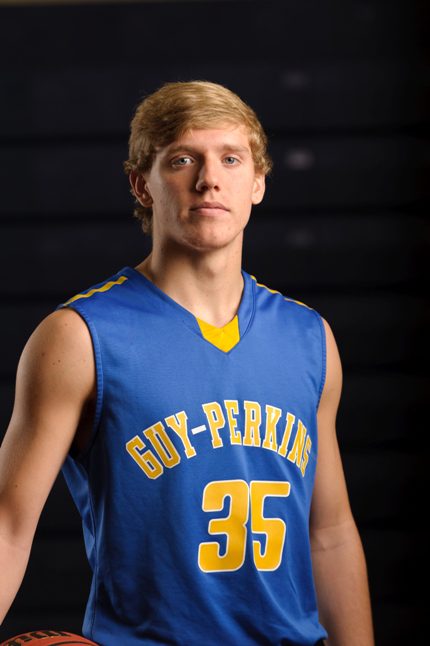 
This fall, the hottest basketball team in the 501 may also be one of the smallest. Off to an impressive 18-0 start, the Guy-Perkins Thunderbirds are playing dominating basketball and show no signs of slowing down yet.


“We’re a really good team,” junior forward Josh Ballard said. “Our record shows it. Everyone on the team — we’re all best friends, and I think it plays a large part in our team’s chemistry. We’re clicking as a whole, and I’m very confident in the group we have right now.”


Ballard was selected to this year’s 501 Basketball Team — 35 players representing the best the 501 has to offer both on and off the court. He was nominated by his head coach, John Hutchcraft.


“Josh is a positive role model at Guy-Perkins and a great leader on the court,” Hutchcraft said. “He is unselfish, encouraging and has great sportsmanship. He leads by example, is an all-around great player and an excellent student with a 3.75 GPA.”


Hand-in-hand with the Thunderbirds’ strong record comes a rather-lengthy winning streak — one that Ballard says that opponents are trying very hard to end.


“At 18-0, a lot of teams are targeting us,” Ballard said. “When they come into games against us, they’re hyped up and trying to end the streak. If we’re not careful, they can do just that. However, while we like the streak and want to keep it going as long as we can, we’re okay with losing if it helps make us better. Sure, we’d love to end the season undefeated, but our eyes are on a much bigger prize right now.”


That prize — a Class A state championship.


“Why not?” Ballard asked. “This season, we’ve already proven ourselves against some of the top Class A teams in the state, including Bay, who won it all last year. We’ve even beaten some Class 3A and 4A schools. We have a really solid group this year, and I’m excited to see how far we can go.”


In the midst of all the Thunderbirds’ victories, Ballard believes that one particular game sticks out from the rest — one that helped build the team’s confidence and allowed them to take their game to the next level.


“Recently, we played against Lonoke in the championship game of the St. Joseph tournament,” Ballard said. “Going against a Class 4A team, we were underdogs, but we went into the finals with no regrets. Many people thought we would lose. But we played unafraid, and we came out with a huge win. After that game, the team realized that if we went into every game with that fearless mentality, then we really could achieve anything we wanted.”


Despite his team’s success, Ballard hopes that the true message of why he plays the game isn’t forgotten.


“When I step on the court, I want to show others what Christ is all about, and I want try to spread His message to all I can,” Ballard said. “I want to be a positive role model for the youth in my community. If I can show others the good in me on the court, then maybe I can help change people’s lives."


Off the court, Ballard is active in FCCLA at Guy-Perkins High School and plans to play baseball next year. The junior is also a member of Crystal Hill Baptist Church in Little Rock.


“I like to help out in the community,” Ballard said. “I’ll help run the concession stands at Guy-Perkins peewee games. In FCCLA, we’re helping provide Christmas presents for a family this year. In my church, we also reach out to help feed the homeless.”


After high school, Ballard wishes to continue playing basketball at the collegiate level.


“I’ve had two colleges contact me so far,” Ballard said. “I’m excited to get the opportunity to keep playing the game. I’m also looking forward to majoring in business accounting so that I can work for my grandfather’s credit union one day.”