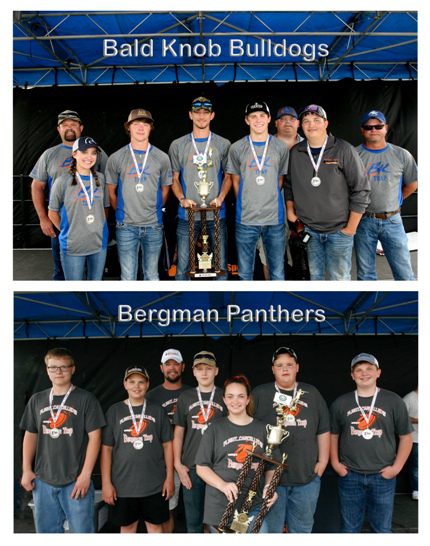 
Chuck Woodson, program coordinator for the Arkansas Game and Fish Commission, said he was impressed not only with the shooting skills of the teams involved, but their attitudes adjusting to the poor shooting conditions.


“When the wind gusts like it was, those clays can really bounce around in the air and become even more difficult to hit,” Woodson said. “But I didn’t hear any complaints from the athletes who took to the trap field. They were there to compete and have a good time.”


The Bergman Panthers Lead Dispensers took first place in the junior division, breaking 112 of 125 thrown clays. The Beebe Blasters took second with 111 clays broken, and the MVE Claybusters claimed third with a score of 110.


Two participants out of the hundreds participating in the northern regionals shot a perfect score of 25 during their one-round competition. Michael Mansfield of Southside Jr. High and Parker Hutchins of Southside FFA both hit all clays thrown during their round and will be invited to compete as individuals in the Champion of Champions shoot during the AYSSP State Championship.


The Bald Knob Bulldogs Senior One team smashed 239 of 250 clays to claim first place in the senior division. While the entire team’s performance was remarkable, the win came with the help of the day’s only two perfect two-round scores. Chase Martin and Tanner Meachum both managed perfect runs of 50 during the gusting wind. They also will be invited to the Champion of Champions shoot at the AYSSP State Championship.


The Beebe Blasters senior squad scored 237, putting them in second place, edging out a second team from Bald Knob, the Bald Knob Bulldogs Senior Two, who had a score of 235.


The top 16 teams in each division from each regional qualifier will be able to compete in the AYSSP State Championship, Friday and Saturday, June 2-3.