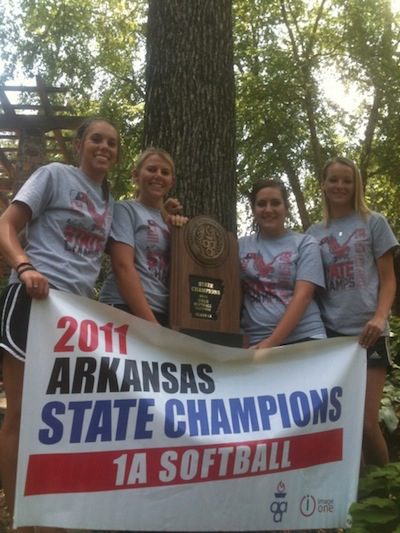 Prior to 2008, Nemo Vista had won two state championships in school history. The boys basketball team won a title in 1975. Twenty-one years later, the baseball team notched the other, in 1996.

Thanks to softball, the Lady Hawks have won two since 2008.

Nemo Vista capped a 32-3 season in May with the Class 1A state championship. The Lady Hawks, who didn’t lose after March 28, swept through the 1A-4 district unbeaten; beat Sacred Heart for the conference title; breezed through the Class 1A Region 1 Tournament, beating St. Paul, 15-0; Scranton, 7-1; and Sacred Heart, 1-0; and dominated the Class 1A State Tournament at Blytheville, defeating Hillcrest, 5-0; Mount Vernon-Enola, 7-1; Greers Ferry West Side, 4-0; and Taylor for the championship, 5-3. 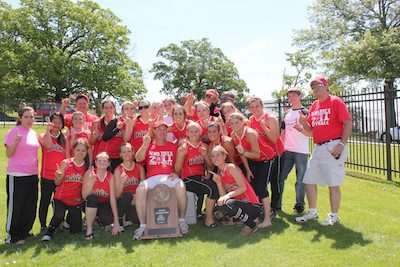 “Our defense was incredible,” coach Scott Perry said of his team’s strength. “We didn’t make many errors, and we played together. Our last loss was March 28 to Pottsville, and after that, any time anybody challenged us, we played great defense.

“The seniors were all wonderful defenders. It was probably the best infield we’ve ever had. And the outfield was young but got better and better. I kept preaching to them that defense wins championships, and we gave up four runs in the state tournament. Three were to Taylor.”

That will do it.

Perry is the father of Nemo Vista softball. The Lady Hawks played slow-pitch prior to his arrival in 2002.

The Lady Hawks, who lost only to Pottsville (twice) and Rose Bud this season, were the surprise of the 2008 state tournament. They entered as the fourth seed from the regional but got hot at the right time to beat Taylor for the state title and finish 23-7.

They returned to the championship game in 2009, winning 24 games but falling to Scranton in the final. In 2010, they won 25 games but lost in the quarterfinals to Taylor.

“In 2008 we had lost two games heading into the state tournament and weren’t playing that well,” Perry said. “This time, after we expected to win in 2010 and got knocked out, we spent a week on two-a-days getting ready, and we had some shirts printed up that said, ‘One Team, One Goal, One Dream’ to push us and motivate us to get there.

“We were probably one of the ones picked to win it all. Having that extra pressure all season and being able to go on and beat Taylor and win the title was extra. We’ve seen both sides of it. This team was really on a mission to avenge that loss and win the state championship.”

Andrews and Murray started in the same positions as freshmen in 2008.

It was quite a weekend for those seniors.

Andrews said her whole career had been a blessing.

“It’s been like a dream,” she said. “The one in 2008 came as more of a surprise. We knew we would contribute to the team and we’d have a lot of success, but never, ever dreamed of being a state champion.

“Since then, we’ve expected success. We knew coming into this season we wanted to leave right.”

Andrews, who will play basketball for the University of the Ozarks in the fall, said there’d been constant pressure since ’08 to return to the final and win.

Murray said the keys to the second championship were focus and hard work.

“We all wanted it for sure, and we worked a lot harder in practice,” she said. “We had a lot more pressure on us this year because everybody wanted to beat us.”

Joining the seniors in the lineup were five juniors and one sophomore. While defense was the team’s strength, the Lady Hawks overcame an early question mark.

“These seniors will truly be missed,” Perry said.

He was assisted by volunteer coaches Freddie Kirtley, Fred Givens and John Wahrmund. Givens and Wahrmund have daughters on the team; Kirtley’s daughter played several years ago, and he has assisted Perry for all 10 years.

Most of the Lady Hawks play some kind of summer softball, and many have done so for years.

“By the time they get to ninth grade and us, they’re ready to go,” Perry said.

So what do they do for an encore?

“I guess you go win it again,” he said, chuckling. “That’s what we’re shooting for. We had a chance in 2009, and we’re excited to have an opportunity to try again. And it’s a good group to do it with. We have a chance to have a real good team again.”

The team’s success has been a rallying point for the school district, the town of Center Ridge and Conway County.

“We sold hamburgers the last day of school trying to raise money for our (championship) rings and made over $4,000 from the burgers and donations,” Perry said. “It’s a great place to live; it really is.”