“We expected him the end of January,” said Diana. “He called New Year’s Day and said he would be home in a week and a half.” As it turned out, his return was delayed after the devastating earthquake hit Haiti, and the military focused on humanitarian efforts for that country. “We were one step closer but not on the airplane going home.”

In all, Jeff spent seven months in Afghanistan, three-and-a-half months in Wyoming and six weeks in North Carolina before returning home earlier this year. He was assigned to a special forces unit in support of the Afghanistan government, providing assistance with building infrastructure.

Describing the country as “war torn,” Jeff said most of the people are receptive and grateful to Americans and Allied Forces for the assistance they are receiving, including medical care, which is scarce. Jeff recalled that living conditions are very primitive in the country, with few educational opportunities.

“It shows you how much we take for granted, the simple pleasures in life.”
While many Afghan people feel that ailments or deformities are “God’s will or a curse,” they believe America “has the best medicine.” They were confident that the American soldiers could “fix” any problem – including Down’s Syndrome, spina bifida or polio – with a pill or simple procedure.

“That was one of the hardest things to explain, that there was nothing that could be done, that sometimes children are born different.”

Happy to be home and reunited with family, Jeff said it took a little adjustment to transition from life in Afghanistan to Arkansas. “It’s nice,” Jeff smiled as he reflected on how it felt to be home and not in a country where he was outfitted in body armor, helmet and guns.

In addition to the obvious time difference, the adjustment included being able to make choices on food and activities as well as other freedoms like being able to go outside and walk around without fear of being harmed. 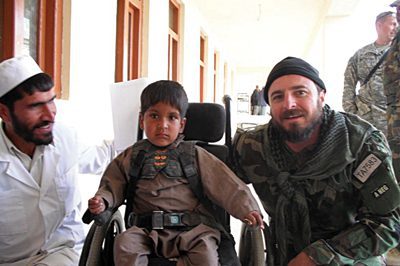 “Those small luxuries you’re not afforded when you are overseas,” he said. “There are small things we take for granted, like hot water and cable TV.”

Diana is originally from Mountain Home and Jeff is from Springdale. They have three children – 6-year-old Kristen, 10-year-old Bailey and 16-year-old Jared. The family has lived at Mayflower for nearly three years.
Understandably, it was difficult when dad was away, especially with no other family close by.
Both Jeff and Diana appreciate the technology that helped the family stay in touch although they were separated by thousands of miles and a 10-hour time difference. Their children, including daughter Kristen agreed. “It’s good,” she said with a smile.

Jeff pointed out that military personnel aren’t the only ones making a sacrifice when deployed. Their families do as well. “They are our main concern when we deploy,” he said. “Not everyone has the support.” He said when others reach out to military families to offer assistance, it helps the men and women who are serving overseas.

“It takes a lot of weight off our shoulders.”

For Diana and the couple’s children, the deployment seemed to go by “really slow” at times, according to Bailey. “I’m just glad he’s back.”

“I was happy when he came home,” added Kristen, with Jared shaking his head in agreement.

Jeff and two others were the only soldiers from Arkansas serving with the unit, so the homecoming they received was much smaller than the others received where the unit was based. But Jeff didn’t seem to mind. “I had everything I wanted.”