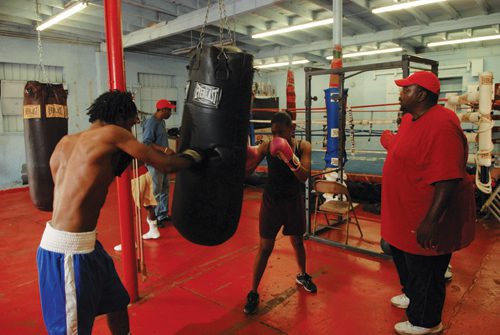 He teaches that actions have consequences. If a young boxer has bad grades, he tells him — or her — to stay home and work on the academics.

Actually, it’s the exact opposite.

Arkansas Boxing Club, located at Eighth and State streets just off Broadway in Little Rock, is perhaps best known as the home gym of the young Jermaine Taylor. Baker said Ozell Nelson, who discovered Taylor at the club and has been closely tied to the former champion’s career, continues to work with the local professionals.

Baker said he had 15-20 amateurs working with him on a steady basis.

“A lot of them, you see them come and see them go,” he said. “Some of the best ones are the ones who come and go, but their hearts are not in it, and some of the ones who are mediocre to average, like Jermaine, later go on to be real good. They have to work hard. Some guys have natural talent and ability but not good work habits.”

Some move on but then return.

“It’s just like piano lessons,” Baker said. “As young kids, we don’t want to go through piano lessons, but when we get older, we want to know how to play the piano. They come back and say, ‘I should’ve stayed.’”

His roster includes a wide array of ages and experience. After working with them, Baker christens them with a nickname.

He’s still deciding on a moniker for his youngest boxer, Jayden Givens, 8, but he tentatively tagged him “The Body Snatcher.” Javonta Jenkins, 11, is “Q-Tip.”

Brothers Kiun and Keevan Evans, 17 and 15, respectively, are “Man” and “Black.” Kiun started competing in open divisions at the 125-pound weight class this year; he’s no longer in the junior classification.

Baker calls Keevan Evans “my son.” He’s ranked second in the nation in the 119 weight class and has competed nationally in the Silver Gloves, Junior Olympics and Police Athletic League. Baker worked with him for about five years.

Chris “Boom Boom” Bell, 19, competes at 132 pounds. He recently won the USA Boxing state tournament to move on to regional competition. If he wins there, he goes to nationals.

Antron “Skittles” Pearson, 21, competes at 152. Greg “The Cobra” Smith, 24, is at 165. Rick “Loony” Alexander has competed at national Golden Gloves and USAs. Lance “The Natural” Boykins, 25, a former Oak Grove High and University of Central Arkansas football player, is a heavyweight (under 201 pounds). He had a 7-2 record at press time and had qualified for the regional Golden Gloves tournament.

Baker calls Boykins, who didn’t start boxing until he was in college, a late bloomer. Boykins loves his new sport.

As one of the older athletes, he sees the advantage of the sport for impressionable youth. “It will help them stay out of trouble and give them something to do,” he said.

At press time, Baker had one girl on his roster: Jalisa “Power Puff Girl” Jenkins, 18.

Baker’s father was a boxer, and a cousin started boxing for the club in the 1980s. Despite his years of working with the boxers, he maintains his mystique with his students.

“None of my kids know my age,” he said after hesitating when a reporter asked.

“I’m at the gym almost every night, from 6-8:30, Monday through Friday,” he said. “I’m pretty strict on them showing up and being on time. I expect them to be here when the gym is open. That’s not always the case; some have other things, like Lance has his home life and a new baby and a job, but he’s still dedicated.”

The Arkansas Boxing Club boxers compete on Saturdays all over the state during the school year. Baker said venues included Boys and Girls Clubs and high school gyms. In the summer, when the Arkansas circuit goes on hiatus, they travel out of state.

The group’s van has been out of commission, so they carpool.

When prodded, Baker agreed that the club had been instrumental in changing lives for the better.

“It’s gotten kids off the street,” he said. “They were doing wrong, and now they’re doing right. We turn them around. As a matter of fact I’ve had schoolteachers come down and wonder what it is I’m doing to the kids to make them turn around and be a better school kid, and my answer is always — not to be blunt with them — but I just spend time with them.

“My mom is a school teacher, and what made her a great school teacher was she spent time with her kids. In a nutshell, all kids want and all kids need is to have time spent with them.”

His is an investment of love — and hope.