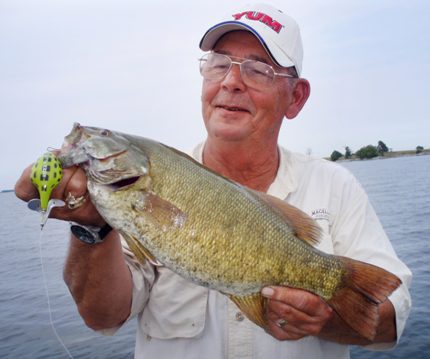 
Arkansas angler and fishing expert Billy Murray recently tackled one of the highest achievements in the sport, an induction into the National Bass Fishing Hall of Fame. His fellow inductees this year include former President George H.W. Bush and Gary Yamamoto, an innovative lure designer. Murray was included in the lineup for his work as a skilled bass fishing educator.


Murray, who is from Hot Springs, said he was amazed and humbled by the honor. “You get in through the representation of all your peers,” he said.


Murray says he is often asked what he enjoys most about fishing. “A lot of people will say, it gives them an opportunity to escape,” he said. “To get away from their thoughts, to get some solitude, to get away from cell phones. But fishing to me isn’t an escape from something, it’s more like an escape to something. It’s what you receive once you are out there. You get to soak in all of the things that make life really worth something. It’s not hectic. You can’t fish and be in a state of mind where you are worried about everything. It lets everything mellow out and you can enjoy [the moment].”


Murray’s career first started over 50 years ago as a fishing guide at Lake Ouachita. “This is my home,” he said. “I fish all the lakes in the state. We are right here close to Lake Greeson, DeGray, Lake Hamilton, Lake Ouachita, Lake Nimrod; we’ve got lots of water. I like the variety of it. Fishing is an adventure every day. I like going to different lakes that are totally different.”


“We not only have wonderful lakes to fish we have some of the best rivers in the country,” he added. “From the Buffalo River, the White River, the Caddo, the Ouachita, the Little Missouri, all of those are fabulous rivers to float, fish and enjoy. The treasure that we have in the state is our water."


Fishing is a family affair for Murray. He has a twin brother named Bobby, who is also an accomplished angler. Bobby won the Bassmaster Classic twice, including the first Classic in 1971, and was inducted into the Bass Fishing Hall of Fame in the very first group. “Now we are the only two brothers in there [the Hall of Fame],” Murray said. “And definitely will probably be the only two twin brothers in there for awhile. We both have worked in the fishing industry our whole lives. It’s been a lifelong quest. And it’s amazing how fishing has grown over the years.”


Billy and his twin brother were two of the most successful, competitive fishermen in the U.S., winning titles from state championships to the Bass Masters Classic. The brothers worked together as a duo and were hosts for various fishing programs on ESPN and the Outdoor Channel.


While his brother was more of a tournament angler, Billy was focused more on the teaching side of the sport. He worked as a cinematographer for over a decade for the popular outdoor show “The Fishing Hole,” which starred famed fishing expert Jerry McKinnis. “I was working with Jerry, we just traveled everywhere, we were on this big adventure,” said Murray. “As everything progressed, I got into teaching.”


In the mid-1970s, Murray formed a fishing education program known as the Bass Fishing Institute, which was the country’s first on-the-water fishing school. The program started at Lake Ouachita at Mountain Harbor Resort in Mount Ida. From there, it went on to become one of the nation’s largest fishing education programs and was taught in major universities across the U.S. until the mid-1980s. Murray traveled with his crew teaching bass fishing tactics to tens of thousands of people across the country. “Our first school was held at Mountain Harbor and from there it just grew and grew,” he said.


Murray also worked for Pradco Outdoors Brand for around 30 years in various positions. His role included creating lures and providing training for Pradco staff and their clients such as Bass Pro Shops and Cabela’s.


Murray went back to his teaching roots this year by creating a new and advanced version of the Bass Fishing Institute that is catered to the serious angler. Classes are held in the spring at Mountain Harbor Resort. Murray said these fishing courses will be an annual event at the resort, which has strong ties to the sport.


Hal Barnes first connected with the area while on vacation in the early 1950s. “Hal first saw Mountain Harbor from a fishing boat with his buddy Caldwell and learned the Corps [U.S. Army Corps of Engineers] was accepting proposals for leases,” said Brown. “After he succeeded in securing the lease he went on a cruise [there] with his good friends the Buttons on their boat and Jane Button named the beautiful area ‘a Mountain Harbor.’” Hall Barnes’ son Bill is now the owner of Mountain Harbor and the Rebel Minnow is currently being sold in more than 60 countries around the globe.


According to Murray, the school is a hands-on multiday course. Participants fish and go to class every day while they are enrolled. They go through various types of drills, including learning how to cast, select the right gear to fish with, and where fish hide and how to get a lure to them. “Everything we teach we verify on the water,” he said.


As for his fishing career, “the most important thing has always been the friends that I have made,” Murray said. “We have traveled all the way from the Arctic to the Amazon fishing with all different kinds of fish, not just bass. I worked with Jerry McKinnis for 13 years. And we got to travel all over the country and meet lots of people. It’s a people sport.”


Having a chance to connect with others who enjoy fishing has amounted to the greatest catch of his career.


“I talk to so many people all the time, from all different walks of life, from all professions,” he said. “At our school, we have everyone from guys that work at Halliburton to doctors, attorneys, federal judges, a whole cross section of people. Fishing crosses all bounds."


Zoie Clift is a travel writer for the Arkansas Department of Parks and Tourism.