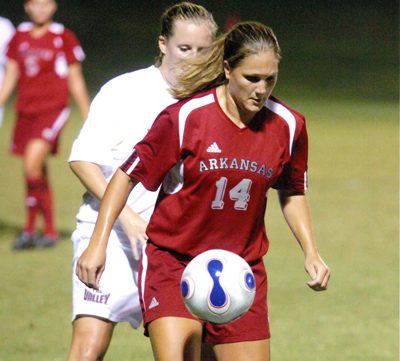 “I’m in a really cool position,” said Allison, 23, who completed her soccer eligibility at the UA a year ago. “Not only did I get to play college soccer, I get to go back and coach at my alma mater. I’ve been where those girls playing for me will be. I’ve played at Conway High; I know everything that goes with that. I’m really excited to be in that position.

“I know I’m young and everything, but I know soccer and love soccer. My motto is, I’ve been lucky enough to be able to play this long and learn so much from this beautiful sport. It’s a fluid, flowing game. You have to have endurance to run for that long, and speed and strength. A lot of people have hand-eye coordination, but with soccer, it’s hand-foot. It’s a thinker’s game.

You have to actually think two plays ahead. It really is a beautiful, beautiful game, and I’m fortunate to be able to play it as long as I did, with great players and coaches and the opportunity to travel.

“I want to teach it the best I can and spread it around. It’s a fun, awesome, beautiful game.”

Obviously, the bubbly Allison relishes this opportunity, as she’s relished all the others that have come her way.

She took the LSAT in September in hopes of being accepted to UA’s Law School next August.

“When I was younger, I set two goals for myself,” she said. “When college soccer was an attainable goal, I wanted to play for the Razorbacks. I bleed Razorback red; I live for the university. And I wanted to go to law school. My parents always said I’m a really good arguer.”

But she’d also always thought she wanted to stay involved with her sport through coaching and teaching, even if that doesn’t turn out to be her main occupation. She’s done some summer camps, and she said now that her playing career is over, the next-best way for her to stay involved is to coach.

“I want to give back,” she said. “Coach (Buzz) Bolding (Conway High’s athletic director) came calling and asked me what I was going to be doing next spring. What an honor — straight out of college to be offered the head coaching position at a (Class) 7A high school — and my old alma mater.”

She reiterated that it’s a volunteer position with no teaching duties involved.

“I’m just coming out as a volunteer coach from January to May,” she said. “We’ll see what goes from there. It depends on if I get into law school whether I do it beyond then.”

Allison, a 5-foot-4 forward, scored more than 40 goals in her four years at Conway, including 21 her junior season when she set the Lady Cats’ record for goals in a season. She capped her Conway career with the game-winning goal in the Arkansas All-Star Game, giving her East squad a 1-0 victory.

Bolding said Conway was excited to have Allison return to the Lady Cats as coach.

“She was a four-time all-conference and all-state player for the Lady Cats and played on the U of A Lady Razorbacks team for four years,” he said. “She was also on the (Southeastern Conference) all-academic team. Whitney will bring the experiences of playing at the college level, which will bring a new philosophy and new ideas.”

And already this fall, Allison has been gathering those new ideas.

At Arkansas, she played for Gordon Henderson, but she has remained close to the program under new coach Erin Aubry, who was hired after last season. Allison said she would be picking Aubry’s brain as she begins her own coaching career.

“I joke around that even though I was a forward, I played defense,” she said. “Our whole philosophy was defense. We played not to get beat. That affected my game, so that’s one of the things I’m going to take into coaching — you can’t play scared; you have to play to win, and you can’t win if you don’t score.”

She said she would bring with her all the experiences with players and coaches from her career.

“I know soccer — I’ve played it, I’ve watched it, I know the game,” she said. “But there’s a whole lot more than that to being a coach. And there’s a lot more to soccer than just playing. We’re going to be doing speed drills, agility drills, an ACL-injury prevention program.

“Why not utilize these tools?”

Allison plans to have tryouts in November. She’ll use those sessions to get to know the team, and in the meantime she’ll be watching game films from last year so that she’ll be ready to go as soon as she arrives in January, just a few weeks before the season starts.

“I’m going to be looking at what I’ve got and planning out what our goals are and my coaching strategies,” she said. “It’s easy for a coach to know soccer and say we’ll do this and do that, but you’ve got to work with what you have. Tryouts will be not only for picking the team but also to get to know the girls so I can plan our practice sessions.”

Allison didn’t start playing soccer until she was 7 or 8, and she quit for a while as she was involved in gymnastics and volleyball.

But the 1999 Women’s World Cup, with Brandi Chastain and Mia Hamm and Team USA’s victory, pulled her back to the sport.

She called the end of her playing career “bittersweet.”

“It’s part of my identity,” she said. “My entire life, I’d been a soccer player.”
But she enjoyed being “a regular student” last spring, acquired a black Lab, Cache, and spent more time with her Kappa Kappa Gamma sorority sisters.

She will work closely with Conway boys coach Robert Irons, for whom her brother, John, will be a senior.

“I actually called my brother and talked to him and asked him, ‘Is this going to be weird?’” she said of her new role. “I told himI didn’t want the guys to give him crap about it, but he said, ‘It’ll be cool.’ My grandparents and parents have made the comment that they will get to watch him play and in the next game watch me coach. We’re five years apart, so we never got to play together on the same team.”

She and her brother were the inspiration for what is now Centennial Soccer Park, a 51.5-acre complex that includes 10 full-size fields.

“It’s amazing, awesome, that my dad (John Allison) went in and wanted to do that,” she said. “The fact that my brother and I played soccer meant that my parents got to experience that and see the need to put together a soccer complex in Conway. It’s an amazing field, and I’m proud of it and my parents are proud of it.”

Allison got to play on it, but her Lady Cats will play their regular games at John McConnell Stadium’s new turf field on the Conway High-West campus.

“Soccer is a completely different game when you get on the turf,” she said. “The grass is very low and the ball moves fast, so you have to make sure your team has really good foot skills and good control of the ball. We’ll need to get lots of practice on that new field. I personally hate playing on turf, but that’s what we have to work with.”

And you can be sure she’ll make the best of it.