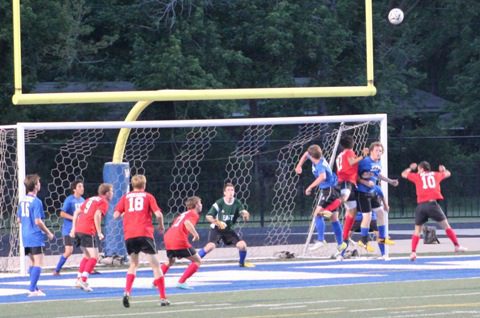 
The recent Arkansas High School All-Star Week activities in Conway were extra special for a couple of Faulkner County athletes.

Jared Thielke, a goalkeeper for Conway St. Joseph and the East All-Star squad, was named the most valuable player in the boys soccer game. Derek Vickers, a third baseman for Mayflower, was named the outstanding player for the East baseball squad.


“The whole game was one of the most intense games I’ve ever played in my life,” Thielke said of the East’s 3-1 penalty kick soccer win. “It was a really good game to watch and play. I loved playing in it. There were really high, intense emotions.”


Thielke stopped three consecutive shots after regulation ended with a 3-3 tie. The only penalty kick that went past him was by Central Arkansas Christian’s Dylan Sherrill. Evan Scarbrough of Searcy and Bradley McBride of Valley View provided the difference for the East.


“I had confidence in myself, but I had no clue I would block three PK shots in a row to win the game,” Thielke said. “But when I went into (the penalty kicks), I was making sure I wasn’t going to lose.”


Thielke’s Bulldogs lost in the first round of the state tournament this year. They fell to De Queen in the state championship when he was a sophomore.


Thielke, who has played club soccer with the Arkansas Soccer Club in Little Rock, Little Rock Futbol Club and Arkansas Rush, will leave in August for the University of St. Mary, an NAIA school in Leavenworth, Kan., where he will be on a combination academic and athletic scholarship. He said he would likely study psychology with the idea of eventually becoming a psychiatrist.

He was president of St. Joseph’s senior class, a member of the E.Y.E. and JOOI clubs and St. Joe’s state championship bowling team.


“He did himself proud and the school proud,” St. Joseph athletic director Chris Kordsmeier said of Thielke’s All-Star exploits. “It’s a pretty neat thing for sure.”


Vickers went 2-for-3 through the baseball doubleheader, which was swept by the West. He reached base all three of his at-bats and made no errors.


“We lost both, unfortunately, but I was more focused on having fun,” he said. “The week was a complete new experience. I loved the coaches, and my own coach (Joe Allbritton) was one of mine.


“It was really nice being able to play for Coach Allbritton one more time. So far it’s one of the better experiences I’ve had.”


Vickers will play for the University of the Ozarks next year.


Thielke said he was pleased that All-Star Week had returned to the 501 after 10 years in Fayetteville.


“I liked it a lot better,” he said. “It was really great that I could play in my hometown, that all my friends and teammates could come see me, and a great honor to play one last game in my hometown. I think it’s a lot better in Central Arkansas. More scouts can come in and more talent can be noticed.”


And the MVP award?


“I gave it everything I’ve got and it worked out,” he said. “It was the best way to close out my high school career.”