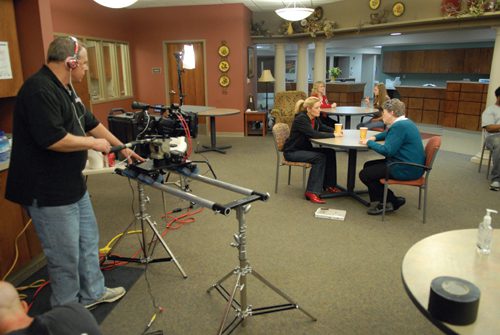 McCann’s seventh film is about Brooke, a music producer from Little Rock with a career in Los Angeles. An addiction to drugs and alcohol forces her to take a break from work and return home to Arkansas, where she makes the decision to move on from the pain of her past. McCann describes it as a story of love, hope, forgiveness and redemption. She portrays Brooke in the film.

Mary Jane Sawyer is McCann’s co-producer. They met by coincidence but quickly became friends as they started working together when Sawyer joined Rock Productions, the team that made the movie.

“It was a smaller production, so we all had many hats,” McCann said. She began writing the film two years ago, and filming started in February.

“Conway Regional was one of our main locations,” she said. “Lori Ross (corporate director of marketing and public relations for the hospital) and her staff were so accommodating. They let us commandeer the hospital and the rehab center.”

Much of the action in the movie takes place at the hospital after the main character is in a vehicle accident.

“We didn’t want it all to be in Little Rock,” McCann said. “People in Conway said, ‘Are you going to shoot anything here?’

We said sure. Lori was on board from the word go. She got us everything we needed.”

She continued, “Our goal is to create an industry (for film) here in Arkansas. There’s no more beautiful backdrop. And we want to portray Arkansans as they are – sweet, nice. Most people portray us as Podunk hillbillies, and that’s not who we are.”

She said she wants to give back to her home state in this way. The creation of a film industry will lead to the need for all kinds of support workers, such as carpenters, hairstylists and restaurants, she said.

They filmed in locations in Central Arkansas, using the real names of places, Sawyer noted.

“Names were changed to protect the innocent,” Sawyer said. For example, a scene was filmed at Cajun’s Wharf, but a character was created to act as the owner in the film.

Actors for the movie were selected during a casting call at The Rep in Little Rock. About 300 people attended, McCann said.

Sawyer added, “We used some of the hospital staff and friends (for extras) and some patients with permission.”

The soundtrack for the movie is made up of original music by Arkansans. Rock Productions held a separate audition for bands.

McCann said the soundtrack is very diverse. “We wanted the story to be able to reach everybody.”

After the editing process is complete, McCann said the film will be shown in theaters.

“MGM and all the big studios are looking for movies like ours that they didn’t have to pay anything for,” she said.
McCann’s next three films are scheduled. She will start shooting her next one in the fall.

Sawyer said the ideal scenario will be to begin pre-casting for the next film by the time “Step Away from the Stone” is being released.

Sawyer said the Central Arkansas community was very receptive to a film being made in the area.

“We had a lot of people that helped,” she said. “Everything about it has been special. We met a lot of people. They all wanted to be a part of making Karen’s dream come true.”