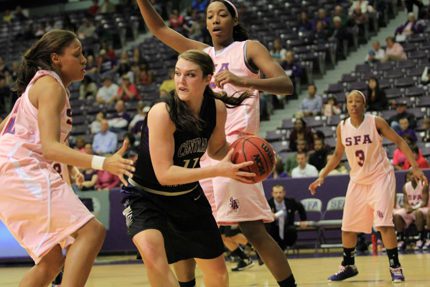 
Ever since she picked up a basketball for the first time, University of Central Arkansas senior Megan Herbert has seen success on many different levels.

For Herbert, the journey began in first grade.


“My mom made me play basketball,” Herbert said. “I didn’t have much of a choice. A couple years after I started playing, I knew it was the thing for me. I liked the challenge and the competition. It’s not an individual sport — it’s a team sport — and you have to work together with your teammates in order to be successful.”


And successful she was. Herbert went on to earn many awards in high school, including four all-state, all-region and all-district selections and a Class 4A state championship with Shiloh Christian in Springdale during her senior year.


As graduation approached, however, she was torn between playing basketball for two Arkansas schools. To help make her decision, some unexpected motivation came from one 501 school.


“When [former Sugar Bears coach] Matt Daniel was recruiting me, he pursued me hard,” Herbert said. “I visited Conway and fell in love with the campus at UCA. The atmosphere, the vision and what Coach Daniel was trying to do with his program — I knew it was where I wanted to be.”


In her first season with the Sugar Bears, Herbert’s presence was instantly felt. As a freshman, she amassed a streak of 23 consecutive games with a double-double — the second longest streak by a Division I player — en route to the 2009-10 Southland Conference Freshman of the Year award. Herbert also led the nation in total rebounds and offensive rebounds and was second in the nation in rebounding average.


Although proud of her accomplishments during her first year with the team, Herbert says it was just the beginning for the revamped Sugar Bears, who finished 6-23 the year before and finished the 2009-10 season with a 21-8 record.


“During my freshman year, we were the underdogs of the conference,” Herbert said. “We all knew that. We were so young and starting just freshmen. By my sophomore year, people had started talking about the Sugar Bears. People began filling the stands and people started believing that we could actually win a SLC championship.”


Since then, the Sugar Bears have finished 21-12 and 24-7, respectively over the last two seasons, including the team’s first SLC championship last season.


“Our hard work, time and dedication are very important to our success,” Herbert said. “In order to be successful, you have to work hard. You have to put so much time and so much dedication into what you want to do. You need to go out there, set realistic goals and work toward them every day. Each time you meet a goal, make a new one. If you keep pushing, you will get better each and every day.”


As for Herbert, the records kept falling and the awards kept coming. She became the first player in SLC history to lead the league in both scoring and rebounding twice, and she became the first player to win back-to-back SLC Player of the Year honors in more than a decade. Herbert was also named the SLC’s Defensive Player of the Year for the 2011-12 season.


“I think her accomplishments say a lot,” said Sugar Bears Coach Sandra Rushing. “She has worked hard to achieve this. People don’t break records just because they are there to break. It shows how much heart and pride that she’s put into this program. She’s such a great role model, and with as much success as she’s had, she’s one of the most humble people I’ve been around.”


Despite all her accomplishments, Megan is still searching to fulfill the team’s biggest goal in her senior season with the Sugar Bears.


Rushing believes Herbert possesses the leadership qualities to guide the team there.


“Megan is a coach on the floor,” Rushing said. “She may be a quiet leader, but she leads by example and is very knowledgeable. Every head coach — every team — needs a player like that who will put their arms around you and say ‘this is what you need to do.’”


“My role is to keep encouraging the girls and to never let them get down on themselves,” Herbert said. “My goal is to show everyone what the UCA Sugar Bears have been building up and working for every single year.”


Reflecting on her career, Herbert recalls one of her most memorable games during her freshman year.


“I’ll never forget the night that we played Tulsa in our house,” Herbert said. “The atmosphere was incredible. Tulsa came here, and we beat them. I’ll always remember that game. No one expected that out of us.”


“That was a really special game for me,” Herbert said. “It was just an incredible moment, and it was such an opportunity for me to be able to celebrate that momen
t on my own court. They stopped the game and gave me the game ball. It was really special to me. It really brought attention to what we have done. It was great for both UCA and the SLC.”


“The ball is locked up in my locker,” Herbert said. “I want to get all the girls to sign it just so that I can have that moment with me for the rest of my life.”


Off the court, Herbert, who graduated in December, focuses on furthering her education.


“I do a lot of homework,” Herbert said. “I’ve been working on my master’s degree, and that’s taking up most of my free time outside of basketball. I do love to go out to eat, go to the movies, go shopping — random things that you expect a girl to do.”


In the final year of her illustrious career as a Sugar Bear, Herbert looks ahead to the future with an open mind.


“I have no idea what the future holds for me,” Herbert said. “It would be awesome to continue playing basketball, but I’m waiting until after the season to make a decision.”


No matter where the future takes Herbert, one thing is for certain: her name and her legacy won’t be forgotten in the Farris Center.


“Having a player of the caliber of Megan Herbert gives UCA a regional and national presence,” said Sugar Bears radio announcer Steve Owens. “At this point in her career, everyone has heard of her. ESPN has reported on her. She’s helped get the Sugar Bear name and brand out there. As much winning as this team has done with wins over BCS teams, SEC teams, Top 25 teams and the SLC title, it has legitimized this program and helped UCA compete and succeed at this level of women’s basketball.”


“Megan has left her mark on this university,” Rushing added. “But I know that she would give up all the individual awards in order to win the SLC tournament and go into the NCAA tournament. That’s the kind of person she is.”


“The biggest challenge is staying consistent,” Herbert said. “It’s basketball — you have your ups and your downs. One day can be great and the next can be awful. You can win championships and lose championships. There are so many emotions and always so many things going on. I never want to lose my drive and passion for it.


“Through my entire career, I’ve loved going out and competing every single day. That’s something that’s hard to do, and it’s hard to keep your emotions under control. But if you do, the experience will be a lot more enjoyable, and you’ll learn much more from it.”