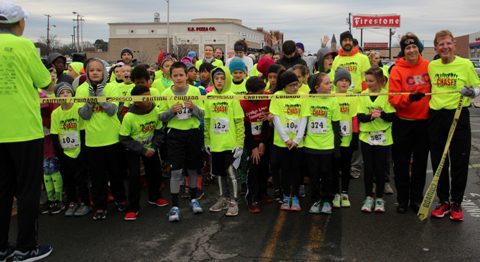 15 Mar A ‘record’ year reported for Chase Race and Paws

More than 400 runners and walkers braved chilly and damp conditions on Saturday morning to participate in the annual Chase Race and Paws in Downtown Conway.


“The 12th Chase Race and Paws was the best ever when you look at the numbers and the street filled with 7- to 10-year-old ‘after school track program’ athletes,” said founder and race director Don Potter. “We had 716 sign up for the race, a 14 percent increase over last year. Due to the cold and wind, some of those who signed up opted to stay at home due to the weather.”


According to Potter, there were 430 who finished the 2-mile race, 33 walkers complete the 2-mile course and 63 participate in the 1-mile leashed dog race.


Chase Race and Paws had its beginning March 11, 2006, as an event to celebrate the life of Donald Lee Chase Potter, 1991-2005. Chase’s parents, Don and the late Cheryl Potter, searched for a way to perpetually continue the legacy of their 13-year-old son who loved animals and suffered from traumatic brain injury. A tragedy has been turned into a commemorative fun event for runners, walkers, children, families and pets.


“Every race softens my heart as I walk around seeing friends and sponsors continuing to support the memorial of my son and recipients of our proceeds,” Potter said. “I love the 501 and its people and would never want to live anywhere else. Our city is not perfect, but we are so close no one can tell the difference.”


This year’ race had a little different tone to it, according to Potter. “First of all, we had a 13-second silence in memory of Chase at the beginning of the race and an awesome National Anthem sung by Marvin Williams, then Conway Mayor Bart Castleberry started the race,” he said “Another feel good moment was the delayed start of the 2-mile race for 90,  6- to 11-year-old athletes. They took off for the Winfield/Tyler streets roundabout and back without hesitation and speed. The happiness of all, yellow tees and encouragement they got as they ran (I was among them) couldn’t have made me any happier. Dr. Alan Lucas sponsored the afterschool track youngsters. They all got to run for free and they all got a tee and medal.”

Organizers are still tallying the financial support but it looks like a record year. “We still are working with a sponsor or two and if they agree to sponsor this year, we will have a record sponsorship of $18,000,” Potter said. “For the 12 years of the race, this $18,000 will boost our equal donations to $153,000, divided equally between Arkansas Children’s Hospital for adolescent brain trauma research and Friends of Conway Animal Shelter for partnering with the needs of Conway’s Shelter adoption program.”


Also at this year’s event, the Conway Police Department’s new K-9 dog was presented from the Kris Allen stage. “The awesome K-9 dog just happened to have been recently named Chase,” Potter said. “How cool is that and everybody got to meet K-9 Chase thanks to Officer Edgmon. How many times do I have to say it, I love 501 and its people.”


Toler Freyaldenhoven, 18, won the men’s 2-mile race with a time of 9:55, one second more that his 2016 winning time of 9:54. “The Man upstairs only made one Toler and I have never met a young man that gleans respect and admiration from all. He not only runs/wins, but volunteers every year for Chase Race packet and tee stuffing. Rhodes College got an unbelieving achiever and student.”

Potter said he noticed something in particular about this year’s participants and spectators. “Participants appeared to be unusually happy and were acting like they had just attended an ‘out-of-the world’ event. There were small groups everywhere taking pictures, arms around each other, parents taking pictures of their children and for some reason numerous people even wanted a picture with me. Participants were loving their dogs and a raccoon showed up again in a stroller. There’s nothing cuter than a raccoon.”


This year’s Chase Race had more than 65 sponsors. “We always have a record number because we solicit presenting sponsors to friends with small sponsorships that we happily accept. Pennies make dollars. Record cold, record attendance, record fun and record sponsorship.”


Plans are already in the works for next year’s event. “This race was the best of the 12 races that we have had,” Potter said. “We hope to see even a larger crowd next year on Saturday, March 10, for the 13th annual race.”