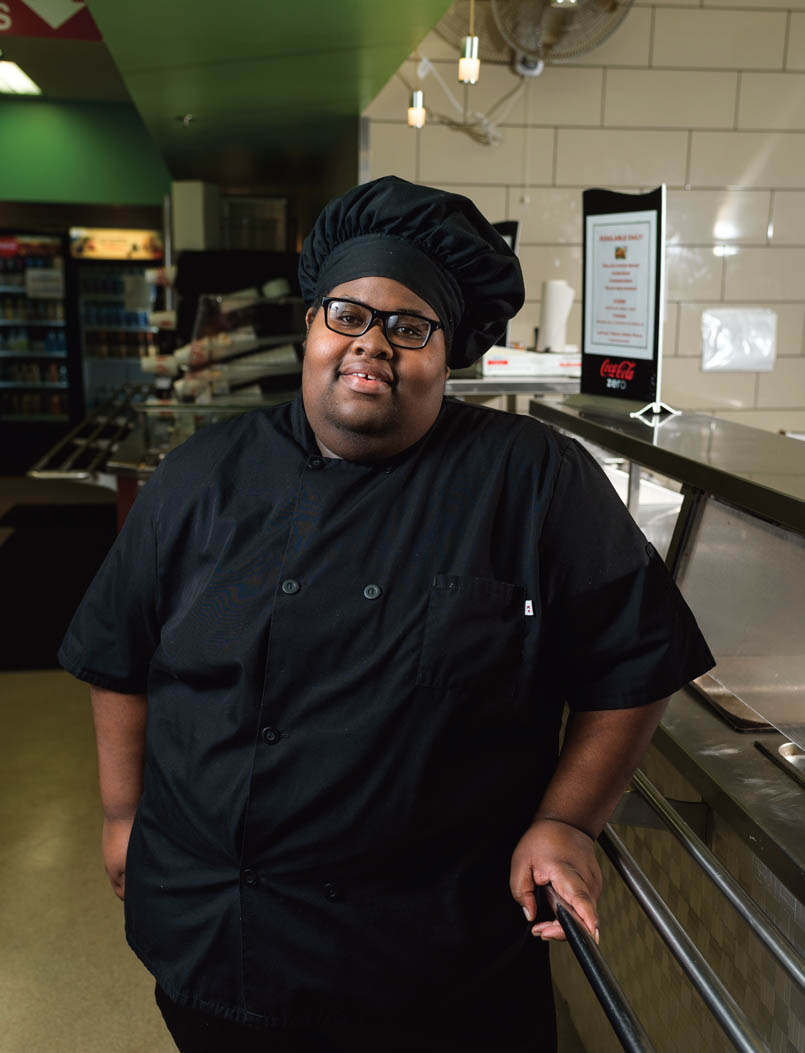 Tiffany Williams has a passion for cooking that has led her to the role as executive chef at Conway Regional Medical Center.

Since her start in 2019, the lunch and dinner menus have been revamped and catering has expanded. Tiffany’s new role has kept her busy and on her toes, but that has not stopped her from creating signature, delectable dishes that are helping to rebrand the cafeteria experience at Conway Regional.

A native of Conway, Tiffany’s love for cooking came at an early age by observing her grandparents who she referred to as “chefs in their own right.” Her passion continued to flourish throughout high school and adulthood. Prior to graduating from Conway High School, Tiffany took cooking classes that kept her involved and that is where she “really fell in love” with cooking.

Tiffany went on to pursue higher education at University of Arkansas – Pulaski Technical College and obtained her culinary degree in 2013. Tiffany said that since then, “It has been one adventure after another.” Before assuming her role at Conway Regional, Tiffany also worked as the executive chef at the Clean Eatery and a sous-chef at the Capitol Hotel in Little Rock.

With the expansion of catering, Tiffany has had the opportunity to prepare more upscale dishes for events such as a quarterly Pastor’s Dinner. She said these dinners give her a chance to prepare dishes that you typically do not see in a hospital setting —dishes expected at a formal event.

One of those dishes is an edible chocolate cup with white chocolate mousse and an array of berries on top. Tiffany has received many compliments from this dessert dish alone.

With the revamping of the menu and the hospital cafeteria experience, Tiffany is urging people outside hospital staff to come in and grab a bite. From pulled-pork to banana pudding, the Conway Regional cafeteria is shedding the stereotype of hospital food.

Tiffany refers to cooking as “therapy” for her. “Many people, when they are stressed, go to their creative outlet which can be music, painting, singing — stuff like that. But for me, cooking is therapeutic because it is something that I really enjoy. Cooking is a way to experiment and really pull out some of those real, creative, deep ideas.”

Tiffany said she does not have a specialty dish; however, most of her ideas come from smells. She can typically smell the combination of things just walking around and it will give her an idea. She gave the example of the coffee kiosk at the hospital. “We have the coffee kiosk, and a lot of times I can smell the different flavors of coffee with syrups and it will spark an idea for something else.”

Most chefs, according to Tiffany, cook by taste, which is not the case for her. The only thing that she tastes for is to make sure there is enough salt in the food that she prepares. She also enjoys going out to eat, which gives her the ideas for her dishes.

When it comes to her job at Conway Regional, Tiffany enjoys her staff the most. “I like having a great staff because when you’re in there just kind of creating, you’re able to bounce ideas off of people and you come up with something super amazing,” she said.

Tiffany refers to herself as a people person, so she enjoys having daily conversations with everyone who comes in and out of the cafeteria, as well as those involved in catering consultations. Her interactions range from environmental services to CEO Matt Troup. “It’s not very often that you work at a place and you see the CEO often. We see him throughout the hallways hanging out — he knows people by name and that’s really cool.”

Not only does Tiffany appreciate her staff, but the entire staff at Conway Regional has welcomed her with open arms since her start in January 2019.

“Everybody that works there is different in their own right. They have their unique personalities, and everyone is super nice.” She said that working at Conway Regional is unlike anything that she has ever experienced because everyone is genuinely nice. Working in the cafeteria has also afforded Tiffany the opportunity to learn everyone’s name and their specific order, which she says makes working “really personable.”