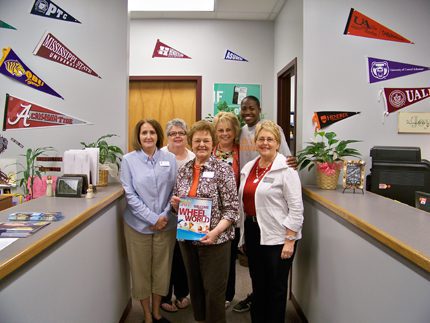 26 Dec A look back – Stricklen makes the WNBA

From playing outside with her brother to games with the Morrilton Lady Devil Dogs and the Tennessee Lady Volunteers, every time Shekinna Stricklen stepped on the basketball court, she dreamed about playing in the WNBA.

On April 16, Stricklen’s dream came true. Selected second overall by the Seattle Storm, Stricklen became the team’s highest draft pick since 2002 and the highest-drafted player from an Arkansas high school in any major professional sport.

“It felt great,” Stricklen said. “It was a dream come true to come out of college and get drafted so high. I am truly blessed.”

In her rookie season with the playoff-bound Storm, Stricklen is averaging eight points-per-game and is fourth on the team in scoring with 215 points. She is also second on the team in rebounds with 116 boards.

“I love the Storm,” Stricklen said. “Playing with the players that I grew up watching really inspires me. The Storm fans are crazy, they’re amazing. We have the best fan system in the WNBA.”

As a Lady Devil Dog, Stricklen brought home many honors including player of the year and helped Morrilton win the 5A state championship. At Tennessee, Stricklen continued to impress, becoming an All American, winning three consecutive SEC championships, earning SEC Player of the Year during her junior year and earning the SEC tournament MVP award.

Now that she’s made it to the biggest stage in women’s basketball, how does a small town girl adapt from life in the 501 to the big city lights of the West Coast?

“It definitely takes time to adjust,” Stricklen said. “Playing in the WNBA is totally different than playing in college. All the veteran players on the team are helping me get better.

Seattle is so much larger than both Morrilton and Knoxville, but I like it. On my days off, I’ll go out and go see things and just get familiar with the city.”

Although she’s met many valuable role models in her basketball career, there will always be one person who Stricklen will remember as a positive influence in her life: former Tennessee Lady Volunteers Coach Pat Summitt.

“She showed me a lot, both on and off the court,” Stricklen said of Summitt. “She pushed me to get better and she really helped me grow as a person. It was because of her that I was able to step up and play in the WNBA.”

Now that she’s achieved her dream, Stricklen hopes that her story will inspire young girls to pursue their dreams.

“You just have to keep working at it,” Stricklen said. “Keep working every day and keep getting better. And most importantly, put your trust in God and He will lead the way.”

(This story originally appeared in the October 2012 edition of 501 LIFE.)