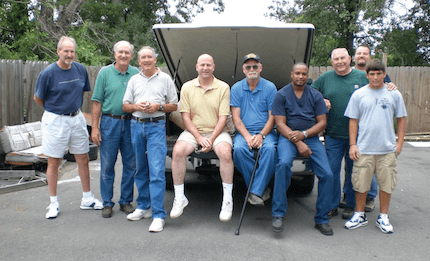 
Antioch Baptist Church in Conway “has this thing called ‘One plus One plus One,’” Don Searls said. “That stands for worship, grow and serve; God commands us to do all three.”

In 2009, a group of Antioch men took that to heart by starting a ministry of vehicle checkups. The idea was Don’s brainchild.


“It was just, kind of, this is what we ought to do,” explained Don, for whom cars have been a hobby for years. He is currently rebuilding a 1931 Model A hot rod.


The men get together a couple of Saturdays a year at Motor Sports Authority on North Creek Drive to do simple maintenance. Anything they can’t handle gets farmed out.


“We have guys checking out the tire pressure and cleaning out the interior,” said Steve Martin. “I’m the dean of vacuum cleaners.”


“We have not paid for a quart of oil,” Don said, adding that Crow-Burlingame donates the filters.


Don met Motor Sports Authority’s owner, Bryan Lin, at a car show. Bryan allows the men to use his racks and often pitches in, polishing headlights.


“He’s been very gracious,” Bobby Stoner said of Lin. “We couldn’t do it without him.”


Many of the ministry’s clients come from the Divorce Care group the church sponsors.


“The focus was primarily [to be] single women who were struggling and elderly people that needed help,” Steve said.


While the other men handle the cars, Harold Clements chats with the waiting clients. He brings doughnuts for them to snack on, takes prayer requests and, if asked, prays with them. At least one woman has accepted Christ as her savior because of Harold’s witness.


When the men complete their work on a car, they present the owner with a tire-pressure gauge etched with the words of Psalm 27:1 — “The Lord is my light and my salvation; whom shall I fear? The Lord is the stronghold of my life; of whom shall I be afraid?” The owner is shown how to use the gauge to check her own tires.


Would-be clients are required to fill out a form that explains what is wrong with the car. The most frequent complaint, according to Don, is scraping brakes.


One of the first vehicles they dealt with was brought in by a woman who told them: “It sometimes just goes to the right.” Once they had it on the rack, they discovered that one wheel was getting ready to fly off. They were happy to be able to solve the problem because “there were two [children’s] car seats in the back seat of the car,” Don said.


Over the years, as people have heard about it, the popularity of the ministry has increased.


“People have heard that we do that, and they’ll just call the church office,” said Don.


For serious repairs, and for requests made between Saturday get-togethers, local businesses are called on to help. The appropriate business is called, told the name of the person bringing in the vehicle and told: “Send us the bill.”


How does the group raise money for this continuing ministry?


“We pass the hubcap around in our Sunday school class,” Steve said, explaining that he has actually put handles on a hubcap.


The guys say the large class runs the age gamut “from 19 to Willis (the oldest class member at 76)” and is “very, very giving.”


A couple of times, the men have even provided a car to someone in need. An old pickup belonging to a church member was donated to Renewal Ranch, and a donated 1996 Toyota Camry was given to a woman who lost everything in the first tornado that hit Vilonia. Once the woman got on her feet again, she returned the car, which was then given to someone else. In another case, a fundraiser was held to replace a church member’s car, which was towed in because it wouldn’t run at all.

501 LIFE would like to thank Don Searls and Steve Martin for providing the photos for this feature.