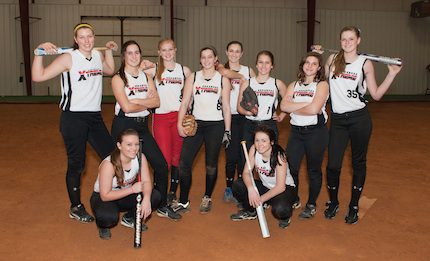 
An old cowboy from Greenbrier has been fueling his competitive nature over the last 10 years in a different sort of way.

Jack Harmon, 71, is the coach and manager of the Arkansas Xtreme 16-and-under fast-pitch softball program, which, according to the team’s website, “helped put Arkansas softball on the map.”


After being drafted by his wife, Lynda, to coach an 8-and-under girls team in Guy in 2004, Harmon took that squad to district and state championships, and his love for softball was born.


“I didn’t know anything, but I took that little bunch and started working with them,” Harmon said. “I just learned. I learned quick there’s a big difference between baseball and fast-pitch softball. I learned as I went, and I study it a lot. Any time something new is coming up, I’m right on top of it.


“I love the competitiveness about it. It seems like the girls, if they’re really into it, are actually more competitive than the boys.”


He said for 40 years he had traveled the country’s rodeo circuit competing in team roping, and the softball outlet now keeps his competitive juices flowing.


Harmon is retired, and he quickly went full-bore into his new sport. With that youth team in ’04, his wife said, he put up some batting cages and pitching nets and brought in two or three girls at a time to work on fundamentals.


“They were so green you couldn’t bring the whole team there at one time,” Lynda said. “But they won a state tournament, and after that he was hooked.”


The lure of competitive softball won out over recreational leagues for Harmon, but the lack of practice facilities was a problem.


“If you weren’t hooked to a school, there was no place for the good tournament teams to practice,” Lynda said.


So he built one on his property between Greenbrier and Guy, tearing down the rodeo arena and stables he had built for his first sporting love to build the Xtreme Softball complex on his horse farm. The 10,000-square-foot complex includes two lighted outdoor fields (including scoreboards and bleachers), an indoor practice field, a concession area with bathrooms and a training facility with free weights and cardio equipment.


“I don’t like to sit around,” he said. “I’m not going to stay in the house all day. I’m going to stay busy. (Softball is) something I can do that’s not real physical, and I really enjoy it when the girls perform good. And when they win, I’m excited.


“It’s kind of like I told them one time, when I was out there roping and riding horses, I never saddled my horse up and had a roping event that I didn’t think I couldn’t win it. I always tell these girls, don’t ever think you can’t win this game because you can. I’ve had that philosophy all my life. You can win if you work at it.”


And the Xtreme has won — both collectively and individually.


Several years ago, its 18-and-under Gold team finished in the top eight among more than 400 teams at the prestigious Sparkler Tournament in Denver.


Every player on that team had an offer to play collegiately for Colby (Kan.) Community College.


For just the second time in the program’s history, every 2014 player does, too.


Lynda, who pioneered the girls softball program in Greenbrier in the early 1970s and, as commissioner of the Guy summer program when she cajoled her husband into that first coaching job in ’04, said that Ecclesia College, a small private school in Springdale, had already made a blanket offer for a four-year full ride for the entire team.


According to arkansasxtreme.com, the goal of the Xtreme organization since 2005 has been to help its players reach the college game.

It continues to do so, with four 2014 seniors set to move on, including Autumn Russell of Greenbrier to the University of Arkansas, Ashley Anderson of Greenbrier to Arkansas Tech, Haley Hambrick of Batesville to Williams Baptist College and Abby Weaver of White Hall to Southern Arkansas University.


The website lists 31 Xtreme alumni who have gone on to play for schools all over the state as well as Middle Tennessee and Ole Miss.
Lynda Harmon said the organization originally had a variety of age groups but that her husband had eventually decided to settle on 16-and-under because that is the prime group for recruiting.


“He put together a really good teenage group, and he saw real quick that to make them better, you had to take them out of state and put them in the wasp nest,” she said. “You’re not going to get better unless you go get beat. He saw it as an opportunity to help kids get scholarships. With so many kids with single moms, he saw that might be the only way for them to
go to college, so that became his pursuit.”


The team has qualified for ASA/USA Softball nationals every year but once, Lynda Harmon said. They travel from coast to coast, with the Spring 2014 schedule including stops in Kansas City, Chattanooga, Tenn., Westminster, Colo., and Salem, Va.


The Xtreme has spring and fall seasons, with spring running from late May (after the high school season) through early August.

Generally, they will practice twice a week and play on weekends. Until then, the Harmons will be busy keeping up with their players’ high school teams as well as their alums’ college games.


Lynda said the players find them.


“Jack started out having tryouts, but through the years, he’s got the reputation that his girls get the offers, and he finds good players,” she said.


“We really come up and work on skills,” he said. “We work with the bats and more or less give them lessons to try to get their mechanics better.”


Although his contacts and reputation help, he said the players sell themselves to the college coaches.


“I don’t give them anything they don’t earn,” he said. “I take them enough places that coaches see them. I know a lot of the coaches across the country and all of them in the state.”


He said he usually picks a dad or two to work with him during the season.


“That way they can do all the hard work, and I can point the finger,” he said, chuckling. “The travel is the part I hate the worst, when I have to go and sit in the car for 10 or 12 hours to get somewhere. But I manage.”


Over the years, he has seen the level of Arkansas softball improve significantly.


“Absolutely,” he said. “There’s a lot of guys out here working with these kids. I’m not the only one. I’m the one that started taking them to Colorado and places like that on a regular basis. What you find mostly is these dads put a team together and go with their kid, and once their kid has graduated, they’re through.


“But I keep going every year.”


Having also coached boys baseball, he said the only real difference he sees between the genders is the girls can be more emotional.


For more information about Arkansas Xtreme, visit arkansasxtreme.com or contact the organization at 501.679.1518 or [email protected]