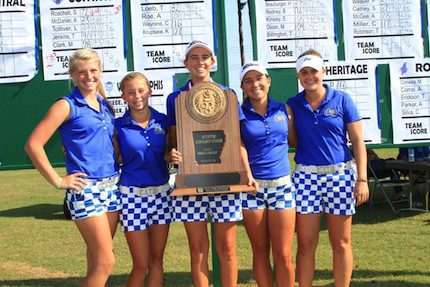 
Conway won a pair of titles in the recent Arkansas state high school golf tournaments, but several other teams from the 501 also fared well.


It was the Lady Cats’ first state championship.


Summar Roachell, the most decorated high school golfer in the state, added another individual state title to her resume as she prepares to head off to the University of Arkansas in the fall. She was also all-conference, all-state and medalist in the 7A-Central conference tournament.


All three Conway golfers qualified for the Arkansas High School Overall championships, which were held Oct. 11 at Pleasant Valley Country Club in Little Rock and brought together the top three individual finishers in each state tournament.


“What an awesome display of golf our teams displayed over the past few weeks,” said Taylor, who within days coached teams to her sixth and seventh state championships. “It was certainly a total team effort from not only the five in the lineup each day but also from the other team members, to the entire school and community who rallied behind us.”


The Wampus Cats, too, were conference champions. Besides Rice and Roberts, Chase Netherton and Tanner Bezet earned all-conference and all-state honors.


“The boys were very excited,” St. Joe coach Chris Kordsmeier said. “The match was so close. Last year we lost by four shots, so they wanted to do really well this year. Waiting around for the scores to be posted was the hard part.”


“I believe the competition within our own team really helped our path to the championship,” Kordsmeier said. “We have eight on the team, and they always pushed each other to get better throughout the season. The boys did very well in representing our school and community. I am very proud of them.”


The runner-up finish was the highest ever for a Conway Christian boys team. Senior Jarrett Bowden shot 83, followed by classmates Shane Starkey at 84 and Brandon Helms with 88. Bowden and Starkey made the all-state team.


“We were just trying to win state before we graduated,” he said. “I knew we had a good chance this year. All the other guys didn’t play as well as they’d hoped, but it didn’t matter.”


Other CAC scores were Michael Foster, fourth with 78; Peyton Herald, seventh with 81; and Jake Wanner, ninth with 82. All four earned all-state honors.