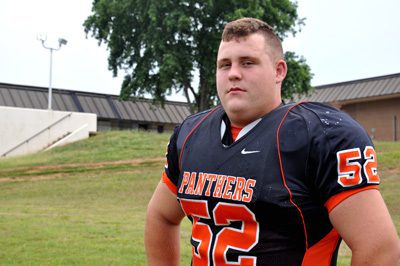 
Just ask anyone who ends up on the receiving end of a Bratton hit.


Nominated by his coach, Ronnie Efird, Bratton is one of the 17 players named to the first 501 Football Team. Members were selected based on their play and contributions on and off the field.


“All the adjectives for the perfect student-athlete fit this kid,” Efird says. “He’s very strong in academics, very coachable, knows his assignments and technique, is football smart and loves the game.”


Bratton led the defense in 2011 and played a key part in Magnet Cove’s 40-22 victory over Bigelow on October 14, the defending 5-2A conference champion.


The Panthers fell one game short of reaching the state finals in 2010 with a 55-30 loss to the eventual-champion Magazine Rattlers.


Bratton’s abilities on the field have garnered much attention from colleges in Arkansas. Bratton’s favorite football player is Arkansas Razorbacks defensive tackle Byran Jones. “He’s such a great player,” Bratton says. “If I were to go and play, I know that could be me.”


However, Bratton doesn’t plan on playing football again after this season.


“I love the game,” Bratton says. “I’ve learned a lot, but I need to think about my future. I’m looking at going to Arkansas State University to become a civil engineer.”


Aside from football, Bratton is also an active track and field player. He finished in first place in the discus throw and in seventh place in the shot-put throw. Off the field, Bratton is a member of Science Club, BETA Club, takes advanced placement classes and volunteers in his community.


“I like the 501 for its small-town feel and the support of the community. We help each other. You can ask anyone in this community for anything and they’ll give you anything.”