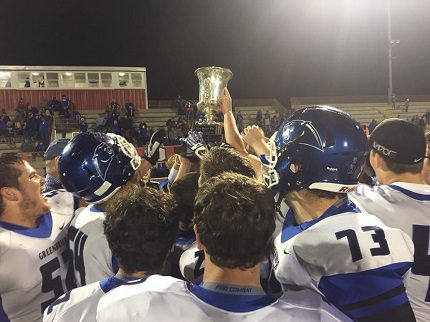 The first round of the high school football state playoffs kick off Friday across all classifications.


Twenty-nine teams from the 501 embark on their playoff journeys this week with a common goal — survive and advance another week closer to a championship.


In the 7A, North Little Rock (10-0) and Bryant (9-1) both have byes in the first round after finishing first and second, respectively, in the 7A Central. The Cabot Panthers (5-5) play host to Springdale.

“Our goal on offense is to win the turnover battle and hold on to the ball and drive right threw the heart of the defense,” said Cabot quarterback/defensive back Cody Skinner. “On defense our goal is to shut down the run and make them air it out and get pressure on the quarterback.”


“I’m very proud of the way my team has performed,” said Conway offensive lineman Nathan Turner. “We’ve improved a whole lot since last season, and we’re very excited to be in the playoffs. Our game plan has been the same game plan all season: Play with intensity, play fast, be focused and have fun.”

“Conway is coming off a tough Week 10 loss to Bryant, but they should be able to put that behind them quickly this week,” said Levi Gilbert, 501 LIFE associate editor and Wampus Cat play-by-play announcer for Conway Corp 5 Sports. “There’s a lot of excitement in Conway around this Wampus Cat team, and for good reason. With a 1,700-yard rusher in Michael George and an opportunistic defense that can force turnovers, Conway fans could be in for a deep playoff run this November.”


Beau Belcher and the Benton Panthers have had a string of recent successes in the playoffs.


“Every year, our team tries to make it to Thanksgiving week of the playoffs, which is the semifinals,” Belcher said. “It’s 13 weeks from the beginning of the season to then, and Coach [Brad] Harris really tries to motivate us to try to get there. We have gotten there the past four years in a row, and it is a major team goal this year.


“I have been in the playoffs every year I have been on the high school team, and it really means a lot to be a competitive team for playoff runs each year. As a senior, I want as many games as I can get, and being back in the playoffs for the third time gives me that extra drive to go to practice every day and work harder than I have the day before.”


Mason Schucker, a senior quarterback for the Searcy Lions, has his team rolling, heading into the playoffs.


“It’s a big deal to us because it just shows that the work we put in during the offseason and summer has paid off,” Schucker said. “Not every team has the chance to continue their season. Offensively and defensively, our game plan is to just execute what we do and not have that many mistakes. We will just do what we do best.”


Two 501 Football Team members play in the first round in 4A: Demias Jimerson and Malvern (3-7) travel to Gosnell, and Jacob Bremmon and Heber Springs (7-3) head to Gravette.


“I think we have really showed people we can play and that what we lost last year hasn’t changed our team,” Bremmon said. “The game plan for us is just to get our run game established and let our defense do what it can do. The playoffs aren’t treated any differently than the regular season. The only thing that should change is the level of focus should rise, and the excitement should be like never before.”


Mayflower (10-0) has earned a first-round bye in the 3A state playoffs out of the 2-3A conference. Two other 2-3A teams play this week: Rhett Roach and Bald Knob (5-5) travel to Rivercrest, and Dalton Koch and Harding Academy (6-4) play host to Centerpoint. Hunter Lawrence and Perryville (7-3) travel to Melbourne.

“It means everything to me and the team to make the playoffs,” said Perryville senior running back/linebacker Hunter Lawrence. “We’ve worked all offseason and during the season to get to this point, and the hard work is finally paying off.


“We have had one of the best offenses in our conference this year, but have struggled the past couple of weeks. On defense we plan to stop their great passing attack and get back to the defensive prowess we had earlier in the season.”

Hunter Hilson and Haskell Harmony Grove (7-3) are on the road at Hoxie this week.


“It means everything for me and my teammates to make it to the playoffs this year,” Hilson said. “Us seniors might not ever play football again, and we want it to last as long as possible. The emphasis on the defensive side is to stop the run and avoid giving up big pass plays.

Hoxie is a good zone run team, but we think we have the game plan to stop it. On offense, we are just going to take what the defense gives us and try to get good match ups with our receivers.”


“We are a very young team with only five seniors on the team,” Sowell said. “For us to have a perfect season moving into the playoffs, it carries over tremendously. I think it will give us the mentality to play great and do everything we’ve been coached to do.”

In the 2A, two 501 Football Team members play this week, and both are from 5-2A teams. Winston Strawn and the Conway Christian Eagles (9-1) play host to Cross County, while Carson Kennerly and Magnet Cove (6-4) play host to Hackett. After starting the season 0-3, Kennerly and the Cove Panthers stormed through 5-2A play with a 6-1 conference record to gain a piece of the title.


“Making it to the playoffs after the long run we’ve had this year is an incredible feeling,” Kennerly said. “After how hard we’ve worked and how much we’ve improved, it feels like it was just our jobs to make it.”