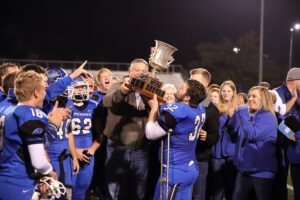 Faulkner County Judge Jim Baker presents the First Service Bank Cup to the Greenbrier High School Football Team following its win over Vilonia. Greenbrier will be playing at Little Rock Christian on Friday, in the first round of the 5A playoffs. (Bill Patterson photo)

This Friday kicks off the opening round of the football playoffs across all classifications. Twenty-nine 501 schools have punched their tickets to the playoffs with the same goal in mind — reach War Memorial in December.

“It’s straight up déjà vu for Conway fans,” said Levi Gilbert, 501 LIFE associate editor and Wampus Cat color commentary announcer for Conway Corp 5 Sports. “Just like last year, they are the No. 3 seed out of the Central, they host Rogers and a win will send them to Bentonville West. This is the same script as last year, but this is a very different Conway team. I’m excited for first-year head coach Keith Fimple and this resilient team. They could very well be playing on Black Friday again this year.”

The 5A is loaded and top heavy again this year in the playoffs. Pulaski Academy hosts Alma, and Little Rock Christian hosts Greenbrier. Parkview is at Morrilton. The Devil Dogs climbed up into the No. 2 seed out of the 5A West, and highly recruited junior quarterback Jacolby Criswell returned early from injury, playing the last few weeks of the regular season and priming Morrilton for a potential deep playoff run. Hot Springs Lakeside travels to Blytheville, and McClellan hosts Valley View.

In the 2A, all of the 501 teams are from the same conference, the 5-2A. Conway Christian (8-2) earned the top seed and plays host to Lavaca. Mountain Pine (7-3) hosts Hackett, and England hosts Earle. Magnet Cove and Quitman both hit the road.