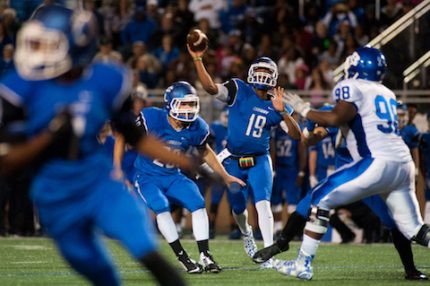 For 32 teams across the 501, the new football season starts this Friday. After 10 weeks of sacrifice, the playoffs are finally here.


In the 7A, Cabot leads the way among 501 teams, having gone undefeated on the season and earning a first-round bye. It hasn’t been all that long since Cabot went undefeated in the regular season — it happened most recently in 2013, and the Panthers ended up all the way in the 7A championship game.


Bryant also earned a first-round bye in the 7A by beating Conway last week to secure the 7A Central title. As luck would have it, this year the winner of the Central gets home-field advantage throughout the playoffs, so the Hornets pose a serious threat in the weeks to come.

"Conway will need to find a good balance on offense," said Jeff Matthews, play-by-play announcer for the Wampus Cats on Conway Corp’s 5 Sports. "The running game was shut down against Bryant, and it will be good for their confidence to get back to running the ball effectively. If Conway wins and the season continues, future success will come down to being able to run and throw the ball. Springdale is down from the glory days that don’t seem that long ago. They won a state championship 10 years ago and had a winless season last year and a two-win season this year. They have a lot of pride and would love nothing more than to knock off Conway and face Har-Ber next week. Zak Clark is a great young coach who is well known in Conway. He played football and baseball at UCA, and his dad, Doug, was the head baseball coach at one time for the Bears.


"Conway has had an incredibly tough schedule. Four of their five losses are to Cabot, Har-Ber, Greenwood and Bryant. Those four teams have a combined record of 38-2. Hard to imagine a tougher schedule than that. That experience is only going to help them as we are into the part of the season that matters the most."

In the 6A, Benton earned a bye with a second-place finish in the 6A South. Searcy and 501 Football Team honoree Andrew Neaville are at home in the first round against El Dorado, and the Lake Hamilton Wolves will host Marion.


Nine teams from the 501 earned a berth in the 5A playoffs, but unfortunately eight of them play against another 501 team in Week 1 (Sylvan Hills at Little Rock Christian; Vilonia at Pulaski Academy; Morrilton at McClellan; and Beebe at Greenbrier). Hot Springs Lakeside plays host to Forrest City.


In the 4A, Malvern and Central Arkansas Christian will face off. Heber Springs travels to Star City, and Lonoke is on the road to Gosnell.


In 3A, Episcopal heads to Bald Knob in a showdown with 501 Football Team honoree Hayden Evans. Harding Academy, who won the 2-3A crown, hosts Booneville.

Mayflower and Benton Harmony Grove are both on the road (at Prescott and Fordyce, respectively), and Glen Rose hosts McGehee.


And in 2A, all the 501 representatives are all from the same conference — the 5-2A. Quitman travels to Gurdon, Magnet Cove travels to Earle, Conway Christian hosts Dierks and England, the 5-2A champs, will host Union Christian Academy.