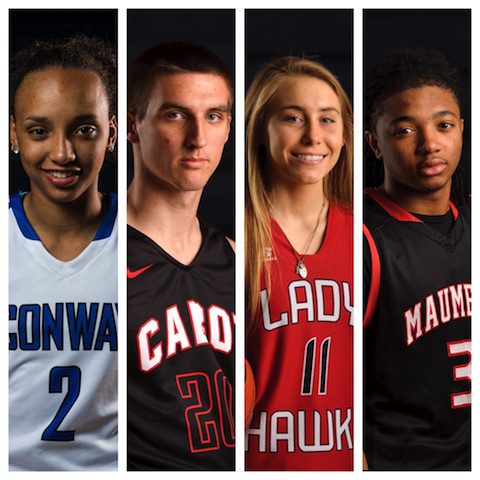 For Tolefree and Andrews, this will be the third-straight championship appearance for each senior. Tolefree and the Lady Cats won in 2014 and lost in 2015; Andrews and Nemo Vista will be going for the three-peat after winning back-to-back championships in 2014 and 2015.


Conway will face North Little Rock in the 7A final. The Lady Cats enter the championship coming off a thrilling come-from-behind 57-52 win over Little Rock Central. Conway trailed by as much as 16 points in the game, and trailed by eight points heading into the fourth quarter.


“There were so many different things that happened in the fourth quarter to help us win that it is hard to pick out one or two plays [that were the difference],” Coach Ashley Nance said.


“Obviously Hailey’s shot was huge, but you can’t look past Maggie Evans’ steals or Savannah’s 3-pointer to tie the game,” Nance said. “Futra Banks was able to get a steal and make two free throws to seal the game up. I think during the whole game we focused on small victories, like keeping it under 10 at the half.


“You look at us compared to Central’s line-up and it would look more like a David versus Goliath match-up. I was so proud of the fight and grit our girls had to compete with the size and athleticism Central had.”


Central posed a defensive threat to Conway unlike any the Lady Cats had faced in 2016. Conway shot poorly from 3-point range — 19 percent. Tolefree and the Lady Cats just kept swinging.


Conway battled through foul trouble and poor all-around shooting, slowly chipping away at Central’s lead in the fourth quarter.


“I think it shows how much heart they have,” Nance said. “They really are a team. They love each other. They respect each other; they don’t want to let each other down. It doesn’t mean things are always perfect, but in the end they know what it takes to get the job done.


“As a coach it was the biggest comeback I have been a part of because the game was in the semi-finals and the winner advanced to Hot Springs for a championship. It was also a shot at us going back for a third year. I have been around the game a long time. My brother hit a 3-pointer in the state championship game at the buzzer to win in overtime in the 90s. I was an elementary kid back then, but that game was huge for my family. As a coach, though, this game would rank No. 1.”


Central had only lost two games on the season until falling to Conway. The other two losses for Central came at the hands of North Little Rock, who Conway will face Saturday at 7:45 p.m. in the 7A final.


“The Lady Cats are among the elite programs in the state,” said Jeff Matthews, play-by-play announcer for the Lady Cats on Conway Corp 5 Sports. “We are all talking about the three straight trips to the finals, but this will also be the sixth finals appearance in 12 seasons. That’s an impressive mark to be certain.


“Lex I know has to be excited to get back in that arena — an arena she lit up in her sophomore season, but struggled a year ago. I expect big things from the senior and the supporting cast. Those familiar five are poised for a great game. All Coach Nance knows are the finals. Three state titles as a player, four trips as a coach with two state titles and a chance at a third. She was the perfect hire six years ago.”


Jacie Andrews and Nemo Vista will take on Kirby in the 1A girls’ championship on Friday at 7 p.m. This is the third-straight championship appearance for Nemo Vista, and Andrews is hoping to end her career with the three-peat.


“Playing my last game in the Bank of the Ozarks Arena is such an honor and privilege,” Andrews said. “God has blessed my team and me with such an amazing opportunity, and we are thankful no matter the outcome. The feeling of stepping out on the floor during a state championship game is unexplainable, and I am so excited to experience it one last time.


“Taking care of the ball against Kirby’s trap defense, getting the ball inside and hitting our outside shots to open up the middle will lead to success on the offensive end. Kirby has two strong post players, and on defense we have to work hard to deny the ball from getting inside. We also have to keep their guards from penetrating the middle and getting off too many outside shots.”


“It feels sensational,” Williams said. “Every high school basketball players dreams of this.”


Williams and Tremont Robinson key the Maumelle offense. Defensively, it will be like Maumelle is looking in a mirror.


“We’re just going to have to man up and sit down,” Williams said. “We have to get stops. Forrest City wants to play just like us, which is a fast pace.”


In the 7A boys’ championship, Cabot senior Hunter Southerland looks to lead the Panthers past Bentonville and Malik Monk.


“It’s a dream come true to get to play in the state championship game,” Southerland said. “It’s amazing to get to be a part of Cabot history. Offensively we have to play as a team and move the ball. We don’t need to care who scores as long as we score. Defensively we have to keep them out of the lane. We have to make them work for every shot. No uncontested looks.”