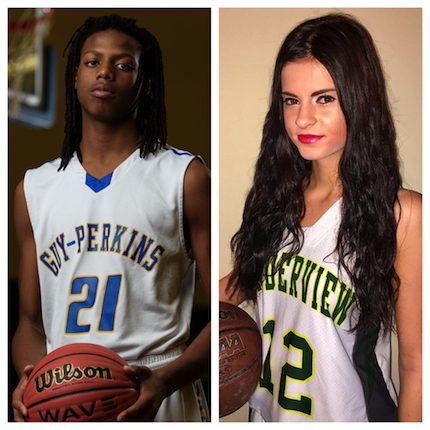 
The high school basketball state championship games kick off tonight, and several teams from the 501 are vying for a title.


Two 501 Basketball Team honorees — Jahcoree Ealy (Guy-Perkins) and Brooke Zimmerman (Wonderview) — will be playing for a 1A championship. For both of these players and their respective coaches (John Hutchraft, Guy Perkins; and Jeremy Simon, Wonderview), success is nothing new.

“Our team played a tough schedule this year, and I believe it prepared us for just about anything that we could see in the post-season,” Simon said. “The thing I learned about my team early on in the season is that they will never give up. When times get difficult, this team comes together and finds ways to win.”


Wonderview won four games last week in Mount Ida. In the semi-final against Norfork, Wonderview took a 23-point lead into the fourth quarter. But with a a starter injured and four players with four fouls each, Norfork mounted a comeback.


“In the fourth quarter, we didn’t handle the ball like we should have, and our defense laid down,” Simon said. “Norfork got hot and took advantage of our mistakes. Luckily, when the game got tight, we did what we had to do at the end. We went 8-for-10 at the free throw line and got stops on defense to close out the game and earn our ticket to the state finals.”


“On a personal level, winning a state championship has a deep meaning for me,” Zimmerman said. “Losing my dad has altered my life, and I think my dad would be smiling down at me, knowing I didn’t give up on the game I love so dear after he died. I’m still pushing for my dream of joining my brother and both my sisters who have won a state championship. I have experience of being here before, but I’m back this year to finish my job.”


Bay is up next for Wonderview Thursday in the 1A state championship game.


“Bay is a very good team, and like us, they played a tough schedule throughout the season, which I believe helped them make the run they are making,” Simon said. “Bay is a team that is very similar to us — small in size with no one over 5-foot-9 — but have several guards who are very talented. They shoot the ball really well from outside, are great at driving the lane and have several players who are capable of scoring in bunches.


“Defensively, we are going to have to control the 3-point line and cut off driving lanes. Bay is very good at rebounding, so we have to make sure we are blocking out. Offensively, we have to execute and take care of the basketball. If we do that, hopefully we will be able to knock down some shots and set up our press.”

In 2A, the Quitman Lady Bulldogs look to finish off an impressive season with a championship over Hector. With only two losses on the season, the Lady Bulldogs enter the championship game Saturday feeling prepared after a tough regular season and state tournament run.


“Beating Nemo Vista and Rose Bud both at home and on the road [in the regular season] gave us confidence that we could play with any team,” said Timothy Hooten, Quitman head coach. “Carlisle and Earle both could easily have been in the same position we are, and if in the opposite bracket could be playing for the championship. Both were extremely athletic and well coached.


“We have had different girls step up in every game of the post-season. It’s one of our strengths. Reagan Rackely, Josey Bradley, Nicki Hooten and Rieley Hooten were leading scorers in five of the six post-season games. This team is undefeated in Class 2A. Their only losses have been to two teams that are also playing for their respective class championships.”


Hector fronts a strong defensive challenge for Quitman, and the Lady Wildcats have multiple scoring threats.


“To beat Hector we will need to shut down Haley Cassidy, make sure Darci Fountain doesn’t get on track shooting 3-pointers and Paige Lee doesn’t score her 15-foot jump shot. I’ll tell my team the same thing I tell them before every game. If you play every game like it is the championship game, when you get to the championship game, it just becomes another game.”

State championship games start Thursday and go through Saturday. All games are hosted in Hot Springs at Bank of the Ozarks Arena.