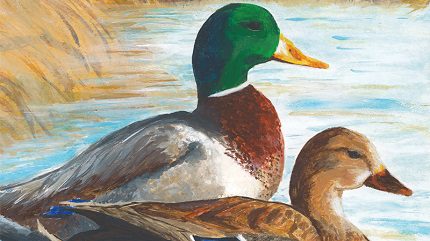 The Arkansas Wildlife Federation and the Little Rock-based nonprofit organization Creative Ideas have come together to promote wildlife education through the arts in the Fifth Annual Wildlife of Arkansas Student Art Contest.


Young artists are encouraged to study and immerse themselves in Arkansas’s natural surroundings, then recreate their visions from that scenery on paper or canvas. They can then submit their work to the contest for a chance at awards, certificates of recognition, money and the opportunity to display their work around the state.


The contest is open to artists from kindergarten through 12th grade. Only one entry is allowed per student and it must be completed in the 2017-18 school year.


“A panel of professional artists will judge the submissions and will choose a first, second, third and honorable mention winner for each grade level,” said Sharon Hacker, founder of Creative Ideas, who works alongside contest organizers to manage the hundreds of entries each year.


“Last year, we had right at 1,100 submissions, but we’re really wanting to expand the program in new areas of the state,” Hacker said.


Hacker says one criteria that has to be met in the artwork is that the image represents animals and scenes found in Arkansas. The artwork does not have to be a portrait of an animal, but artwork depicting animals not found in The Natural State will not qualify for the contest.


“We have had some very good work that had to be returned to the artist without being judged because it was of an exotic place or animal,” Hacker said.


In addition to winners in each grade level, one piece will receive the “Best of Show” award, which comes with an additional cash prize.


“We will hold the awards ceremony at Witt Stephens Jr. Central Arkansas Nature Center later this year, where all winning pieces will be displayed for a month before moving to the Forrest L. Wood Crowley’s Ridge Nature Center in Jonesboro,” Hacker said.


The display will travel to all four of the Arkansas Game and Fish Commission’s nature centers throughout the year. It also will be displayed at the Arkansas Wildlife Federation’s annual Governor’s Conservation Awards Banquet. A calendar also will be generated from winning artwork.