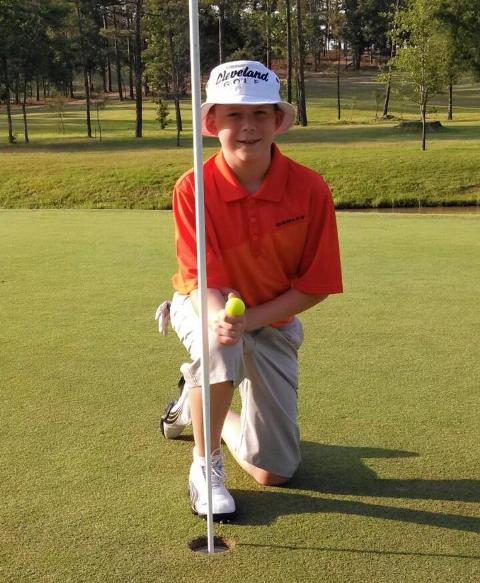 
Eleven-year-old Gram Middleton of Conway started his summer off with a bang – a hole-in-one at Nutters Chapel Golf Course.

Lyle Middleton and his wife, Tracie, were on the course with both of their children – Gram and his 6-year-old sister Sidni – when Gram made the hole-in-one. It was mom’s first golf outing in 12 years and Sidni’s first golf game ever.


“It was a family ordeal,” Lyle said.


Mom captured photos of Gram’s incredible shot on Hole No. 3, with frame by frame capturing the swing and then pulling the ball from the hole. He used a sand wedge to make the 75-yard shot.


Lyle said when his son swung the club and hit the ball, he thought it was going to be a good shot. It landed about five feet from the hole, took a bounce, rolled toward the hole and dropped in. “I yelled,” Lyle said. “He didn’t realize it until I yelled…I got more excited than he did, I guess.


“I think the whole golf course heard it.”

The Bob Courtway Middle School student has been playing golf since he was 4 or 5. “He was in diapers and he was swinging a golf club,” said his father, who is the athletic director and golf coach at Central Baptist College.


During the summer, Gram plays golf three or four times a week. He also enjoys baseball and basketball. This is his second year to play competitively, on the Junior PGA and US Kids.


Gram has a bright future ahead in golf, according to Lyle, if he chooses to continue to practice and pursue it. “His golf game is pretty good,” Lyle said.


Gram is not one to get too excited, but the accomplishment – a rare feat for golfers – has sunk in and he thinks it’s “cool.”


Lyle – who has played golf the last 16 years – has hit one hole-in-one, but it was his son’s accomplishment that was more thrilling for dad. “Seeing his, that was definitely more exciting for me.”